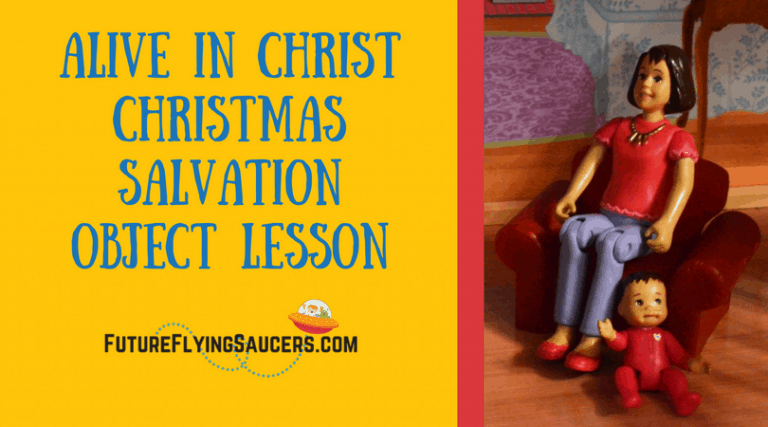 What does the term fellowship mean? What about Immanuel? Here is a simple Christmas Salvation Object lesson that will help kids understand both of those terms. Do you know what fellowship is? (Allow for answers.) Think about animals for a minute. {Hold up the lion, zebra, and then giraffe.} Lions hang around with lions. Giraffes hang around with other giraffes. Zebras gather in herds with other zebras. {Hold up the bear.} What about bears? They don’t really travel together in groups. But bears are more friendly to other bears than to other animals. Mama bears take care of baby bears, but not baby squirrels.

What about God? God is Spirit. Who does He hang out with? (Allow for answers. The kids will probably say people, but you want them to answer another “spirit”.)

{Hold up the dollhouse people.} Each person has this sin problem. Every person has a dead spirit within them. We are born spiritually dead. We cannot do anything to get our spirits alive again. God has to fix that problem.

A man named Nicodemus went to Jesus. Jesus told him that unless you become born again you cannot see the kingdom of God. Nicodemus, now confused, asked, “How can I re-enter my mother and be born again?” Jesus told him that you had to be born of water and of the spirit. Ahha!! There is that dead spirit that is inside of us. It must be reborn!!

What about the verse that says, “Believe on the Lord Jesus and you will be saved?” (Acts 16:31) Believing and being born again are two different things. Even Satan believes in Jesus, but he is not born again. For example: I believe that Tim Tebow is a real person, but I don’t know him. I’ve never met him. Believing is only a part of being born again.

The term for believe means to entrust. It comes from another Hebrew word that means to be persuaded. When someone believes in the Lord Jesus, then that person is persuaded to entrust Jesus with his entire being. And when that belief is that strong, Jesus then dwells inside and the spirit is born again. It is given NEW LIFE!

And then you know God. You have met him. And the Creator of the entire universe dwells inside of your body. This equals fellowship! God with us!

Conclusion of the Christmas Salvation Lesson:

Do you believe in Jesus like I believe in Tim Tebow? Perhaps you know Jesus exists, but you don’t dwell with him. When you believe with your whole being that Jesus dwells in you, then you act differently. You walk and talk with Jesus. Introduce Jesus to your friends. You gather with other people who know Jesus and dwell with him. Read about Jesus so you can know more about him

Are you doing those things? Or are you still spiritually dead?

Christmas is a great time to learn more about Jesus and to really think about what he did when he was born in Bethlehem.

Jesus is a great God. I urge you to dwell with him today!