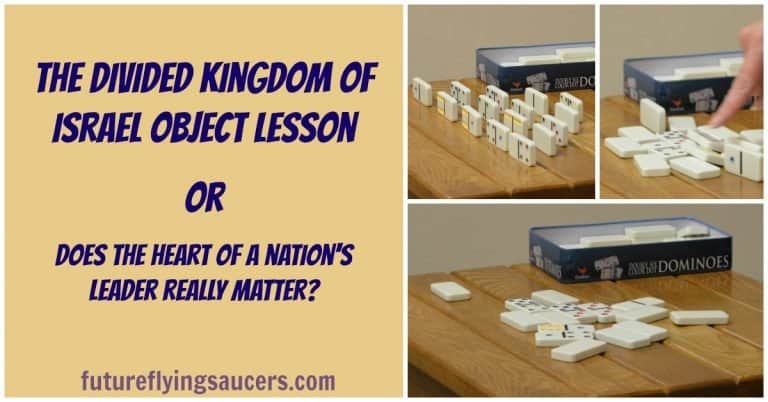 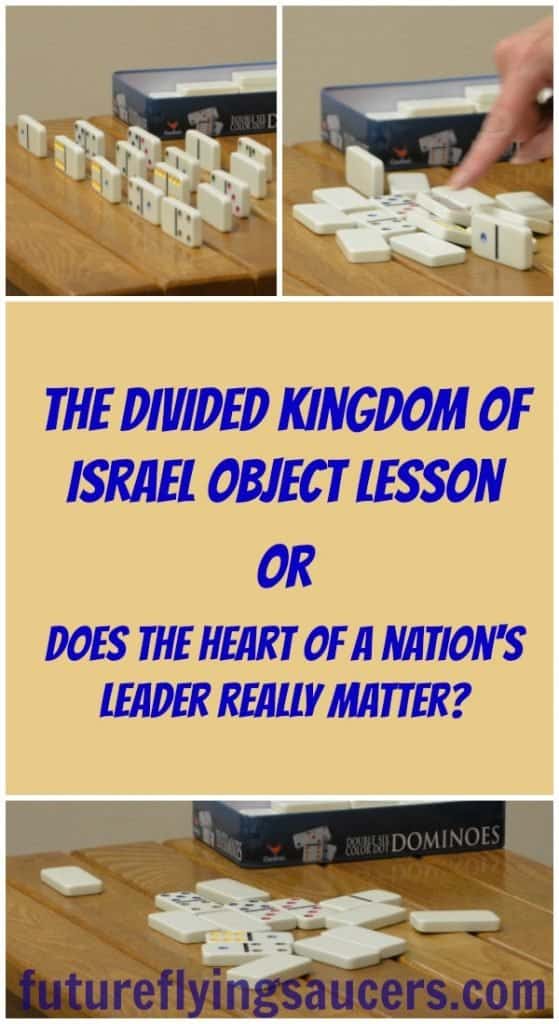 How important is a nation’s leader to the spiritual well being of his nation? In this Divided Kingdom of Israel Object Lesson, explore that question and the examples of kings, prophets, and the people.

Focus Scripture: 1 Kings 11:28 – 12:16 {Events towards the end of this lesson come from 1 Kings 14 – 2 Chronicles. Many interesting things happen during the divided kingdom, including adventures of the prophets.}

Materials: Dominoes; table on which to build domino train {Try to use the type with straight sides. I used ceramic tiles and they didn’t work as well.}

Background: IF Solomon walked with God faithfully and was obedient, THEN God would establish his throne forever. BUT IF Solomon and his descendants turn from the Lord and worship idols THEN God will cut off Israel from the land and reject the temple and Israel will be a name of ridicule.

{Stand the dominoes on end to make a pyramid shape. Ask:} 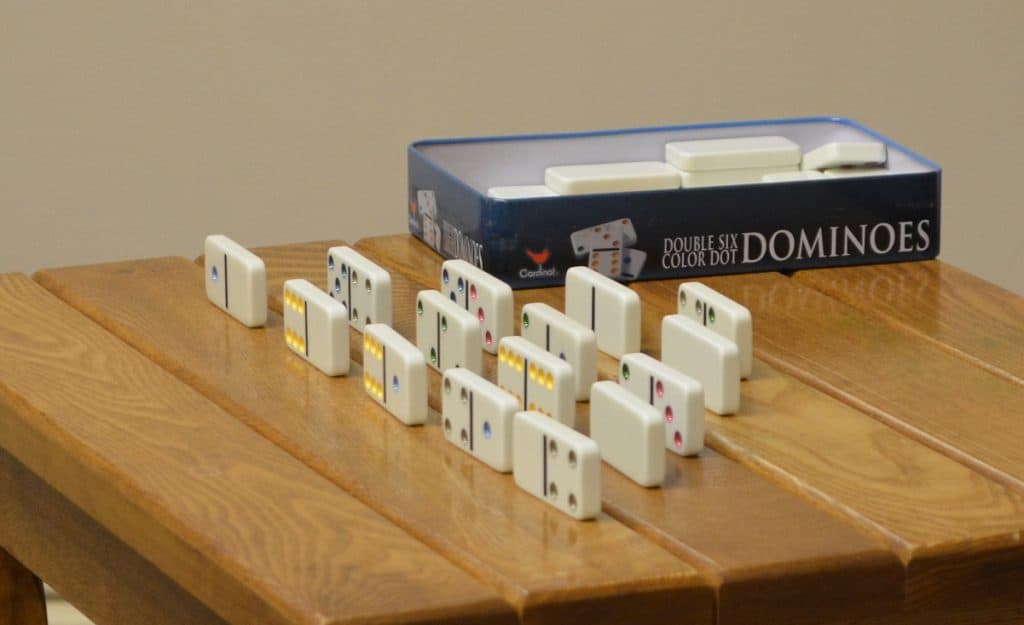 {Knock over the domino and have the others fall. As you pick them up and build the pyramid again, talk about how God built the nation of Israel as a review. End with Solomon being the king. Point to the top domino.}

{Tap the first domino again and say, “If the king chose idol worship, the so did the majority of the people.”} 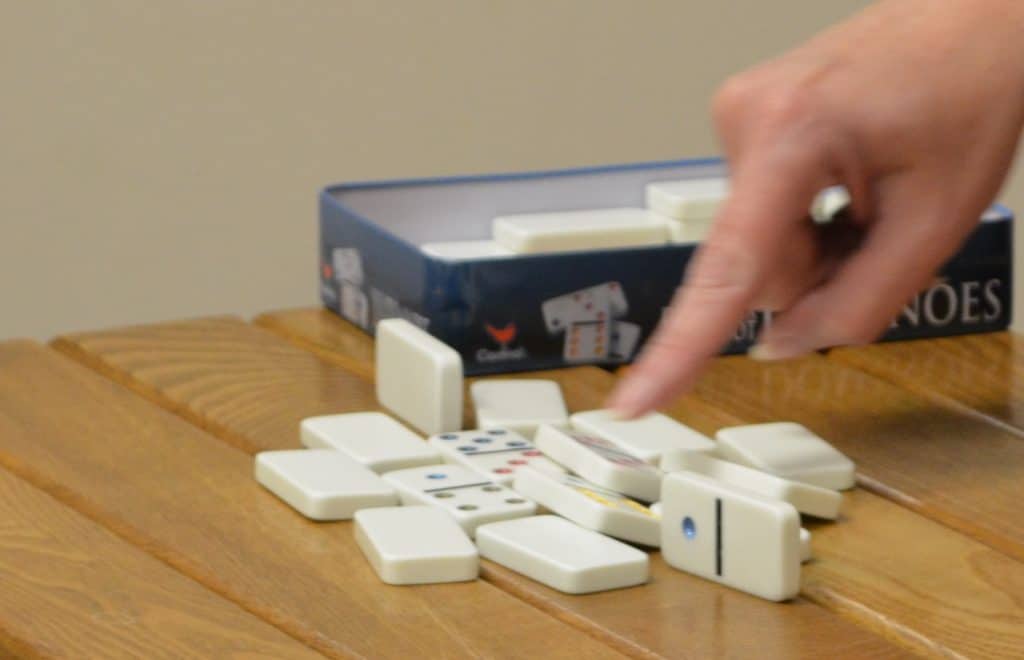 Solomon’s heart eventually turned from God. This man, who was given wisdom by God, decided to have MANY wives. 700 to be exact. AND he had 300 women that he treated as wives, but weren’t. Many of these wives were from other nations with other gods. When they married Solomon, he allowed their gods into Israel and into his heart. He even built alters and temples for these other gods. And he worshiped them.

Therefore the Lord became angry with Solomon. God told Solomon, since he had decided to worship other gods, that He would tear the kingdom away from him and his sons and give it to a servant. However, because of His love for David, and because of David’s heart toward God, He would not do this terrible thing during Solomon’s lifetime. God also told Solomon that He would not take away the entire kingdom from Solomon’s family. Solomon’s sons would get to keep a kingdom of one tribe instead of all twelve tribes.

Some time after this, God spoke through the prophet Ahijah to a servant of Solomon’s named Jeroboam. The prophet had on a new cloak. He took it off and tore it into twelve pieces. Ahijah told Jeroboam to pick up ten pieces of the cloak. God told Jeroboam he would receive ten tribes of the kingdom and that if he obeyed God’s commands that He would be with him. Solomon somehow found out about the prophesy and wanted to put Jeroboam to death. Jeroboam fled to Egypt.

Solomon died and his son Rehoboam became king. The people of Israel, including Jeroboam who had returned from Egypt, came to the new king and asked if he would lighten the yoke that was on them. Rehoboam called all of his father’s advisers and elders to ask them how he should run the kingdom. Solomon had taxed the people quite a bit and the elders advised Rehoboam to lighten up on the people. Rehoboam then went to his younger advisers and asked them what to do. They told him to tax the people even more. Rehoboam rejected the advice of the elders and told the people, “My little finger will be thicker than my father’s waist!” and he told them he would punish with whips and scourges. Therefore Jeroboam replied, “To your tents, oh Israel!”

Rehoboam prepared for civil war. He wanted to fight, but God stopped him and said, “This thing is from Me!” Rehoboam obeyed and did not fight which allowed ten of the tribes to side with Jeroboam to form the nation of Israel. Rehoboam was left with the lands of Judah, forming the nation of Judah. [Levi doesn’t really count because the levites had cities all over the nation.] The GREAT NATION was divided.

Jeroboam did not want people traveling to Jerusalem to offer sacrifices to God because then they might not return. So he built alters and temples to God and other gods in his nation. Jeroboam was not obedient to the Lord, and this began years of turmoil and consequences for these tribes. 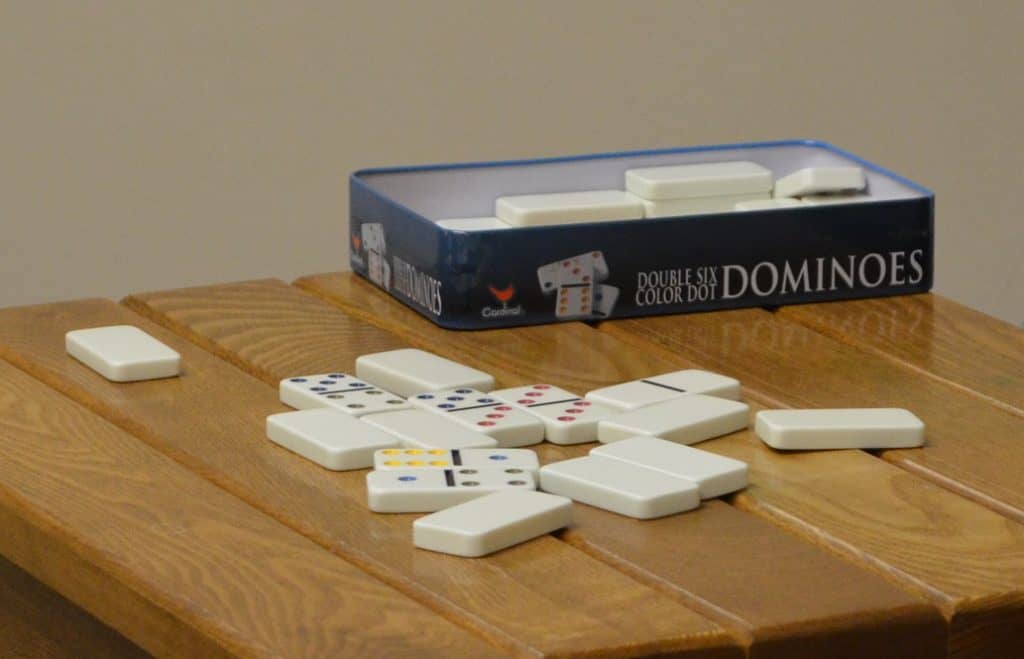 Life Application of The Divided Kingdom of Israel:

Yes, a leader’s personal beliefs matter when leading a country. Over and over God tells the leaders, if you will obey Me…then I will be with you! And we see in this tragic and sad bit of history what happens when a nation’s leader does not obey the Lord.

Throughout the books of Chronicles and the prophets we see civil war and unrest. We see offerings made to other gods. We see people involved in horrible sin.

The heart of a leader leads him, and he leads those under him, and eventually, the leader changes the people of a nation. Not everyone though. Many of the kings during the time of the Divided Kingdom were evil, but we learn about people like Elijah, Elisha, and Isaiah. Those whose hearts totally belong to God are able to withstand any leader. 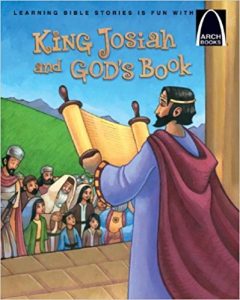 Let’s be sure that we pray for our leaders even if we don’t agree with them, and be sure to be involved in voting when the time arises.

What can we learn from The Divided Kingdom? The leader of a nation influences the spiritual growth of the people under him. The leader can be for God, or against Him. We need to pray for our leaders.