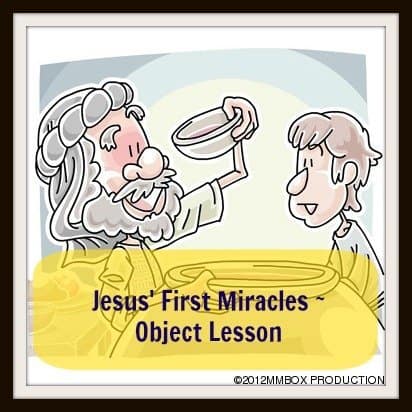 Background: After the Passover, Jesus started having some issues with the Pharisees, so He decided to leave the area of Judah and go back to Galilee. He went through Samaria. There he met a woman. This woman had a history of not making wise decisions. Jesus had an amazing conversation with her. The disciples came back and were amazed to find Jesus speaking to this woman. The woman left her water jar, ran to town, and said, “Come meet the man who has told me everything I have ever done. Can this be the Christ?” The whole town went out to meet Jesus.

{Hold up the veil.} Weddings are beautiful! A bride walks down the church aisle to a man who is committing to love and cherish her. The man listens as the woman promises to respect him and take care of him until death parts them. It’s interesting that Jesus’ first miracle happens at a wedding because in future conversations Jesus will mention how He is the bride groom and the church is the bride. There was a wedding in Cana. This wedding took place before Jesus went to Jerusalem for the Passover. Mary, Jesus’ mother, Jesus and His disciples were at the wedding feast. This would be like a wedding reception, only these feasts would last up to 7 days. Usually all of the best food and drink would be served the first few days to the guests, and then as the feast went on, the food and drink would not be of the best quality.

At this wedding, the host ran out of wine. Mary somehow found out and told Jesus. He responded to her, “What does this have to do with us? My hour has not yet come.” This was during the time when Jesus’ ministry was still beginning, but Mary told the servants to do whatever Jesus told them. There were 6 stone water pots. They were large enough to hold 20-30 gallons each. And these particular pots were used for the Jewish custom of purification. Before eating, Jews would wash their hands, along with the cooking and eating utensils. There were probably a lot of guests, so large jars of water would be needed. Jesus told the servants to fill the jars to the brim. ALL the way up to the top. Then He told the servants to take some out and take it to the headwaiter. Jesus did not touch the pots…

Evidently the water had been changed to wine. In fact, the headwaiter went to the groom and complimented him that he had saved the best wine until the END of the feast. Scripture doesn’t tell us if the headwaiter knew what Jesus did, but the servants sure did, as did the disciples. The Bible tells us that with this miracle Jesus showed His glory and the disciples believed in Him. This shows us that Jesus was Creator and had power over nature.

After Jesus’ conversation with Nicodemus and His time spent in Samaria, He went back to Cana. A royal official came to Jesus. We are not told who this was, but it was probably someone in Herod’s government. The fact that this high ranking official came to Jesus should not be missed. He, possibly, risked his reputation and future job by going to Jesus. But for this father, his son was the most important. This official begged Jesus to come with him and heal his sick son, for he was close to death. Jesus replied, “Unless you people see signs and wonders you will not believe.” Why in the world did He say this? You need to know the whole story… 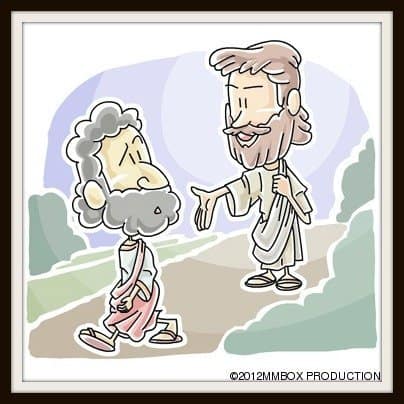 The official begged again for Jesus to come, but Jesus knew of the official’s faith. Jesus knew that this man would not need a sign in front of him in order to believe. Jesus did not go with the official. Instead, Jesus told the man, “Go, your son lives.” Scripture tells us that the man believed. See? Jesus knew he would!

The official’s servants met him on the way home and told him that his son was well. In fact, they told him the specific time that the boy was healed. The official knew that it matched the time when he had spoken to Jesus. This shows us that Jesus had power over sickness. AND that he did not have to be present to heal.

But Jesus did exactly what was needed in each situation so the people involved would believe in Him. Jesus also knew that there were some Jews who wanted Him to perform miracles in front of them before they believed in who He was. But that is not faith. Faith is believing in things hoped for. The official believed in faith. He hoped with his entire being that Jesus had spoken the Truth. And THEN when he saw his son alive, the official’s belief was solidified, along with his whole household.

Are you in a situation where you need Jesus to work a miracle? Check your faith. Are you wanting to see the miracle BEFORE you believe? Faith is believing in Jesus and in Who He is even if the miracle never comes.

How is your faith?

** Cute Cartoon Images are from http://www.christiancliparts.net