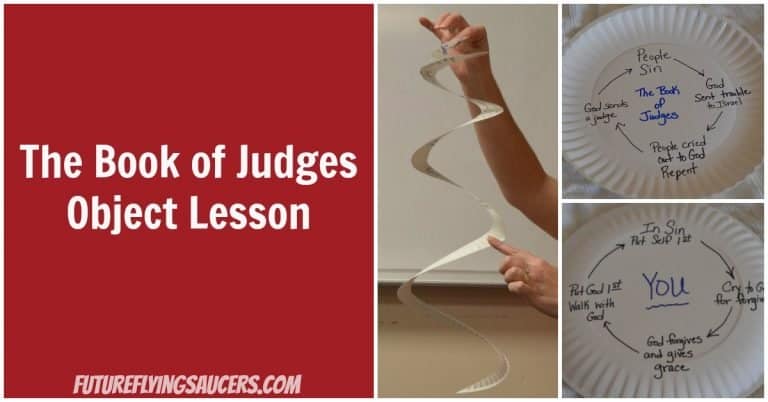 The Book of Judges Object Lesson

The cycle of sin. What is it and how do we deal with it? This Book of Judges Object Lesson explains the cycle of sin and compares the Israelites’ cycle with our own. Materials: Paper plate (see images for labeling); Scissors; Print out 3-4 M.C. Escher pictures. I copied the image and then pasted it into a Word document. Because of copyright, I cannot give you those images. {This link takes you to the Escher Gallery.}

Background: Joshua and the Israelites were to take the Promised Land by entering westward over the Jordan River and then dividing the land in half. Then there would be a southern campaign and then a northern campaign to conquer all of the cities and peoples. Before he died, Joshua gave the nation a farewell address. He told the people to finish conquering the Canaanites. And to remember everything that they had seen the Lord do for them. He encouraged them to be strong and to obey the Lord. And then he warned the people to get rid of the idols in the land. In conclusion, Joshua challenged the people to choose: “Choose this day whom you will serve. As for me and my house we shall serve the Lord.“

{Show each piece of art to the children. Have them describe what they see and discuss how the images trick their eyes. These are fun pictures!} M.C. Escher was a graphic artist who loved architecture and fantasy. Many of his artworks play with optical illusions and buildings. It is great fun to look at his drawings and see how they trick your eyes.

These fun pictures tricked our eyes. Our eyes can be tricked into seeing something that isn’t true.

There are going to be plenty of times in life when this happens. Our eyes and ears can deceive us.

Israel was a Theocracy, which means it was a nation that was led by God. God had used Moses to bring the people from Egypt and Joshua to take over the land of Canaan.

Joshua led the Hebrews for about 50 years. The tribes of Israel were comprised of people who had been born during the years of wandering and had seen God’s hand at work as they conquered the wicked people who lived in the land.

Once Joshua died, and the last of the elders from that generation had died, there was no leadership, no king, and no real government. God was to be the leader. However, following a faceless God is a hard thing to do and each tribe did it’s own thing instead. They did not conquer the rest of the Canaanites as they were told to even though God sent messages to them to be obedient. An entire generation grew up not knowing anything about God.

Therefore God had the Canaanites stay in the land to test the faith of His people. And they failed miserably. The people fell into gross idolatry and gross immorality to the point that “everyone did what was right in their own eyes.”

The book of Judges spans about 400 years and during those years, there are many cycles of one certain behavior.

1) The people sinned against God by worshiping idols and living unholy lives.
2) God sent an oppressor/army/disaster to trouble Israel..
3) The people cried out to God for help and repented.
4) God showed pity and brought about deliverance through a judge.
1) The judge leads the people until he died and then the people sin again…etc. etc.

There are certain phrases that are repeated in the book of Judges. One is “everyone did what was right in their own eyes.” Another is “and the children of Israel did evil in the sight of the Lord.”

The Hebrew people were to be led by God. Even when Moses was leading them, the people didn’t want to interact with God much. They would listen to Moses and Joshua. They would obey at times. But once they were in the land on their own, the Israelites forgot God. Most parents did not teach their children about God like they were supposed to, and therefore, most of the children grew up not knowing about Him. “Everyone did what was right in their own eyes.” The people rejected God’s ways.

{Show the paper plate for the book of Judges.} The Israelites were supposed to follow a faceless God. But then the faceless God decided to send His Son to the earth. NOW God had a face! Jesus told His followers, “When you see Me, you see the Father.”

We have the letters of the New Testament that tell us all about Jesus, what He did, and how He treated people. We know that He lived and died and rose again.

You encounter Jesus when He, through the Holy Spirit, starts working in your heart. You start realizing you have sin.

{Flip the plate over to show the YOU side.} And so on and so on.

Your cycle of sin and forgiveness can be different from the Israelites ONLY if Jesus is your Savior. Instead of seeing life through your own eyes, you see life through the eyes of Jesus.

{With the scissors, cut the plate into a spiral.} Some people choose to stay in their sin. They encounter Jesus and reject Him just like the Israelites did. Maybe that’s where you are right now. Do you know you are a sinner? Is God working in your heart?

When a person chooses to believe in Jesus and live God’s way, then this new cycle begins.

{Stretch out the spiral.}

Our goal is to be more and more like Jesus. And every time we sin, and we go to God for forgiveness, and He gives us grace, and we walk with Him…every time this cycle happens, God uses it to change us more and more into Jesus.

{Point to the top of the spiral.}

We will never reach the goal of behaving like Jesus until we are in heaven with Him. But every day we can get a little bit closer to the goal.

{Go into an alter call here if you so choose.}

What can we learn from the book of Judges? All people live in a cycle of sin and rebellion. It’s only through Jesus that we can break the cycle and have a new cycle that changes us into the image of Jesus.