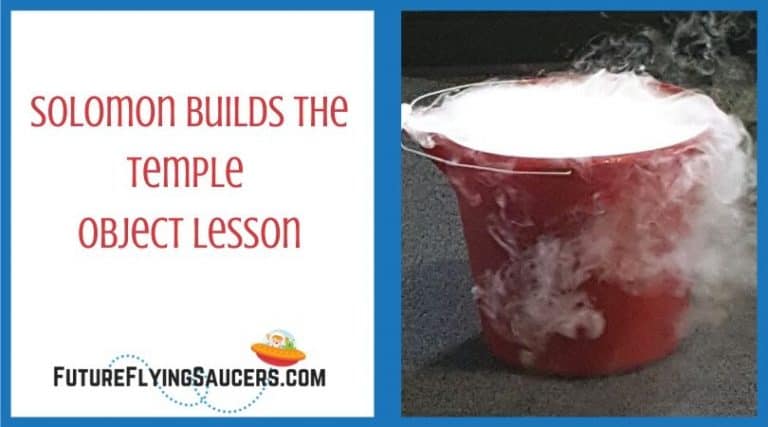 Where does God live? This is a great question! Use this bible lesson to discuss how Solomon builds the temple so God could dwell with the people of Israel and how the Holy Spirit now dwells with those who choose to follow Jesus.

**Funny story – I first wanted to do this lesson using a fog machine. While the idea was spectacular, the results of my practicing this lesson caused the fire alarm to go off at my church which then caused the Fire Marshall to come out to the church to turn off the alarm. Needless to say, use dry ice unless you have a lot of experience with fog machines!**

Background: King David did not think it was right for him to live in a beautiful palace and God live in a tent. David inquired of God, but God did not want David to build Him a temple. Instead, God made a covenant promise to David that someone from his family would be on the throne for eternity. This is a reference to Jesus who was born into the family of David and who is the Eternal King of Kings. King Solomon became king and was able to build the temple.

Preparation: Fill the bucket 1/2 to 2/3 full with warm, or room temperature, water. “Decorate” your teaching area with the cooler (holding the bag of dry ice), the bucket, gloves, tongs, and the shiny gold objects. The kids will be SO curious!!

[Hold up the gold or bronze object and ask:]

It might look funny for us to have shiny gold walls, but when it came to building the temple, Solomon not only had candle sticks covered in gold, but doors and walls covered in gold.

Four hundred eighty years have passed since Moses brought the Israelites out of Egypt. Solomon had been king for four years and then he began the process of building the temple for God. God had been dwelling with the Israelites in the tabernacle, but Solomon’s father, King David, desired to build God a temple. God told him no. So David collected materials for the temple instead. 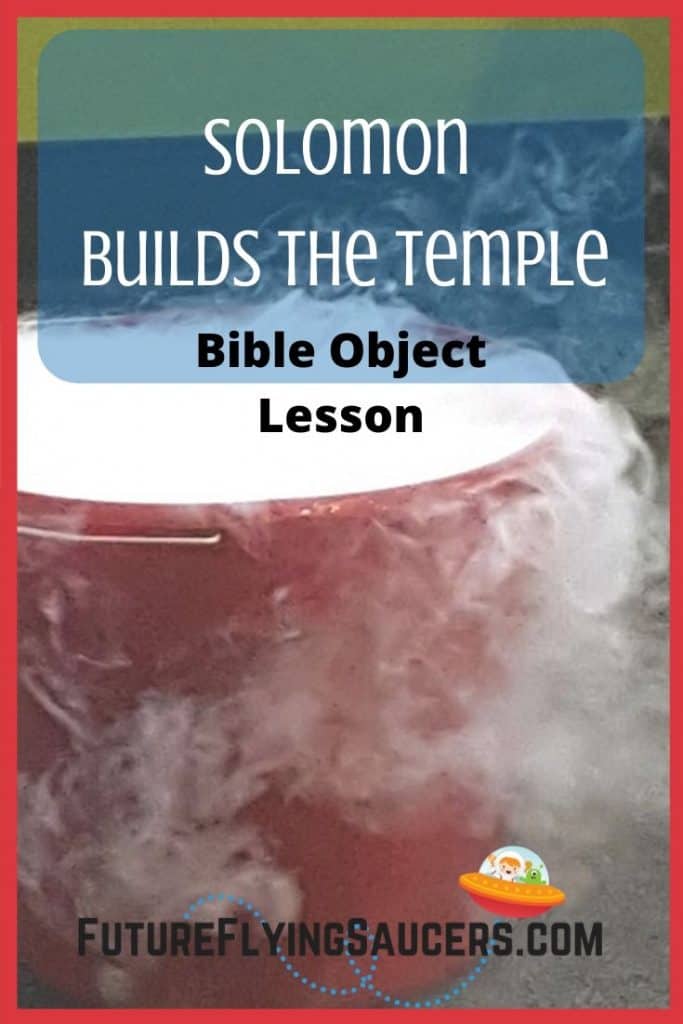 I only have a few items that are shiny gold, but inside the temple the walls, the doors, the chains, the statues, the furniture, almost everything was covered in gold.

It took Solomon and all of his builders seven years to complete the temple. When all the work was done, Solomon brought in all of the treasures that his father David had collected. Then Solomon called all of the leaders of the people together. It was time to move the ark of the covenant from the tabernacle to the temple. (1 Kings 7:51 – 8:6)

In front of King Solomon, the elders, and the men of Israel, the priests carried the ark of the covenant into the temple.

Imagine the people standing outside in anticipation. This had never been done before. Israel had never had a temple for God. Picture four priests carrying the ark of the covenant. Maybe there was a choir of priests singing some of King David’s songs. Perhaps there were men playing trumpets or rams horns. It was a formal celebration!

The priests walked the ark of the covenant into the place of the Holy of Holies. When the priests came out, a cloud filled the house of the Lord!

[Stop here and tell the children that this part of the story deserves something special. Make a big deal of pulling on your gloves and opening the cooler. Use the tongs to place 4-5 fist-size pieces of dry ice into the water. As you talk about the cloud filling the temple, blow on the “cloud” in the bucket. The kids will love it!] 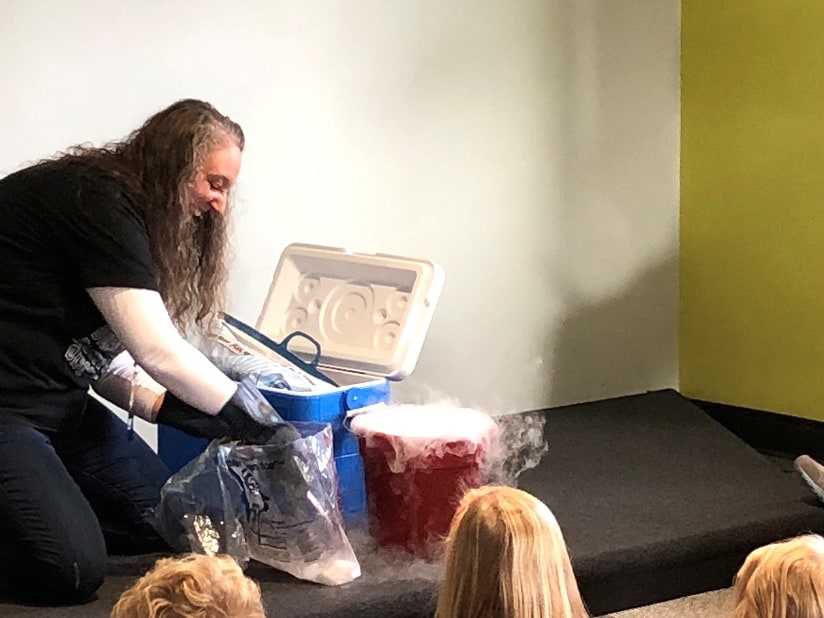 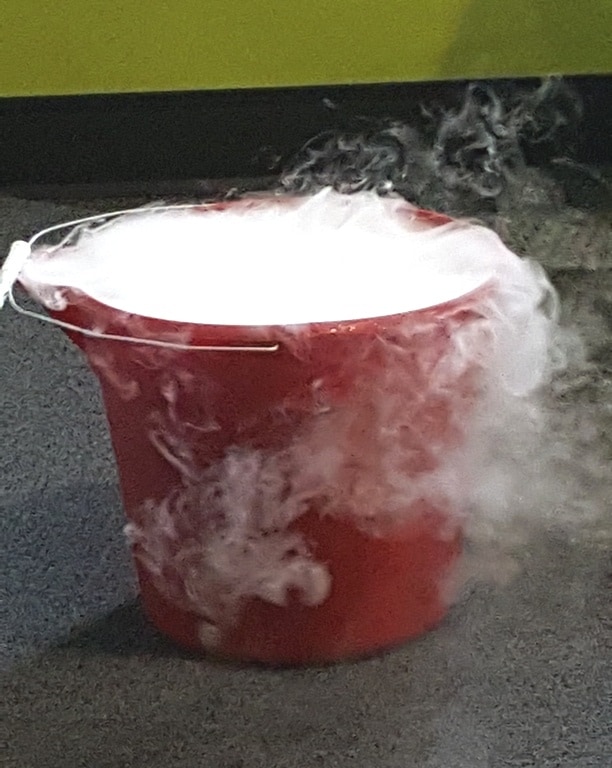 But the temple and the sacrifices that took place there aren’t really what God wanted in the first place. God loves us. God loves you. He wants to dwell with you. So God sent Jesus. When Jesus died on the cross He became the only sacrifice needed. When we confess Jesus as Lord, and believe in our hearts that Jesus rose from the dead, then we are saved from our sins. We can have a relationship with God.

Then something crazy big happens! The Holy Spirit, the same One who raised Jesus from the dead, comes inside of you and DWELLS inside you! It doesn’t hurt. You can’t physically feel it happen, but in your spirit you will. Your body is the temple. And God wants to go everywhere with you so He can help you, guide you, teach you, correct you, and help you be righteous.

What can we learn from Solomon building the temple? In the Old Testament, God dwelt with the Israelites in a tabernacle and then in a temple. In the New Testament, Jesus was sent by God to die for His people so He could dwell in our hearts.