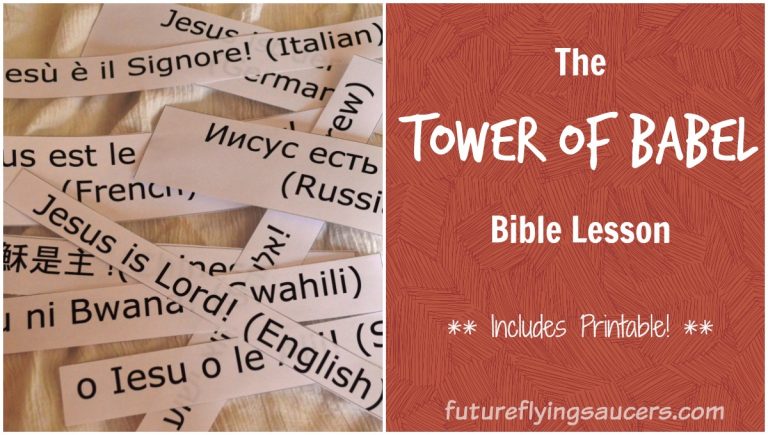 The Tower of Babel Bible Lesson

Why are there so many languages if all people came from Noah’s family? Where did Ham, Shem, and Japheth end up living? And why should we care about this today? The Tower of Babel is more relevant than you might think. Background: Noah’s family was saved from destruction by using the ark. After the water receded and the ark rested on top of Mt. Ararat, God placed the rainbow in the sky as a sign of His covenant to never destroy humanity with a world-wide flood again. God also told Noah and his family to multiply and spread out over the earth.

Object Lesson for The Tower of Babel:

{Once you have the cards cut apart, put them in a stack from hardest to easiest to figure out what the words mean. For example, I speak English, so that would be last. Chinese, Hebrew, or Russian would be first. Hold up each card and have the children figure out the message.}

I have a stack of cards that have a message. I’m going to hold them up one at a time and you tell me what they say.

{The children will respond strongly to the languages that are very different from your own. Make this a fun activity!}

Bible Lessons for The Tower of Babel:

{Put the cards to the side.}

After the flood, God told Noah and his family to multiply and fill the earth. Babies had babies, and more and more children were born, but they did not spread out. Instead, they moved to a place called The Plain of Shinar. No one really knows exactly where that was located, but it might have been between the Tigris and Euphrates Rivers.

The people wanted to be remembered. But it was more than that. God knows our hearts. And He knew what was going on in the hearts of those people who were building the city and the tower. God went down to the city to watch what they were doing.

When people begin to desire power over obedience to God, that makes people dangerous to themselves and others.

Therefore, God confused the language of the people. They stopped building and the Lord scattered them all over the earth.

We have to go back a chapter to Genesis 10. It’s a genealogy chapter. It also tells us how people grouped up as nations and divided by languages. Remember, Noah had three sons: Ham, Shem and Japheth. It would make sense, because God is not a god of chaos, that He would scatter people in an organized way. And He did.

People scattered in family units called clans and they had their own language. The descendants of Ham are thought to be the people of Egypt, Ethiopia, North Africa, and Canaan. The people in Europe and western Asia are thought to have come from Japheth. Shem is ten generations away from a man named Abram and the Hebrew people are from his line.

Life Application for Noah and the Flood:

{Show the cards of the different languages.}

When Jesus was here on the earth, He told the disciples to go into all the nations and make disciples. Those who love Jesus are still doing that today. There are still people groups who have not heard about Jesus. They don’t know the gospel. They don’t know about salvation.

Revelation 5:9 tells us about a song that is sung in heaven and the words tells us that those who are redeemed come from every tribe, tongue, people, and nation.

God spread people across the earth beginning with the Tower of Babel. When Jesus returns there will be people who represent every tribe and nation. All of those people will be saying the message on our cards in their own language.

What can we learn from the Tower of Babel? We are to be disciples who help share the gospel with those of every nation and tongue. That might mean going to other nations. That might mean talking with our neighbors across the street. But all of those who love Jesus must obey His command to make disciples.

TIP: If you are teaching multiple groups at different times, be sure to number the cards so you know what order to put them in for the next lesson.