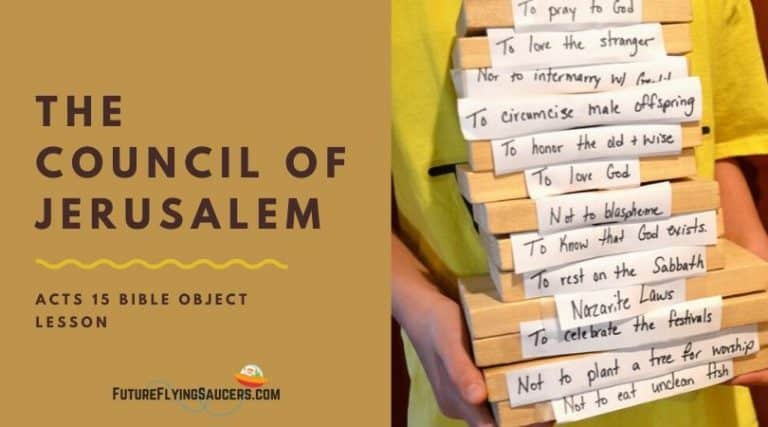 What does a life change because of Jesus actually look like? Use this Acts 15 object lesson about the Council of Jerusalem to discuss salvation, grace, and life change. 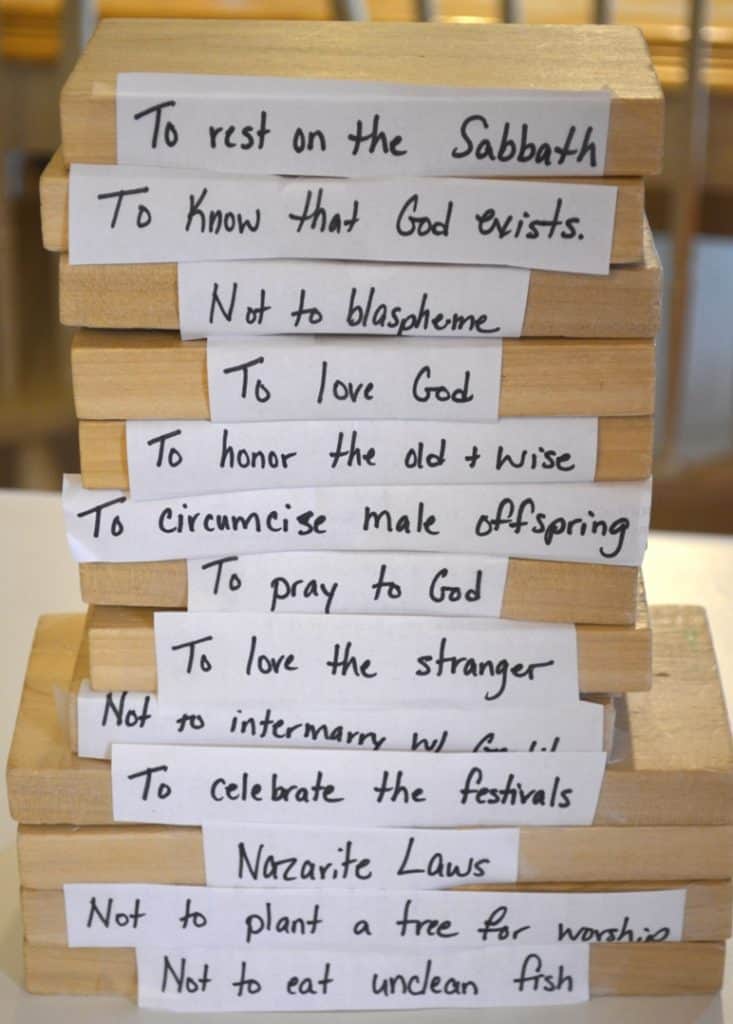 **This chapter of Acts involves the topic of circumcision. Depending upon the age of the children you teach, you might want to be vague about the meaning of the law. You don’t want to lose the group because they are giggling, or embarrassed, about the topic. In this lesson I chose to be vague, but if you have children who are mature enough to handle it, you can use more specific terms.**

{Have a student come to the front of the group.}

Remember that the Jews were given laws from God such as the Ten Commandments. He gave them these laws so they would become His nation and be different from the surrounding nations. There were also many other laws that the Jews were to keep. There is nothing wrong with these laws. They are good things to do.

{Begin reading out the laws you put on the blocks as you stack them in the arms of the student.}

The Jews were to obey these rules every day or whenever God had told them to do a particular law, such as the festivals. These were commands, not options.

{Tell the student to stand and hold the laws while you tell the story. You will find that the “laws” become “heavy”.} 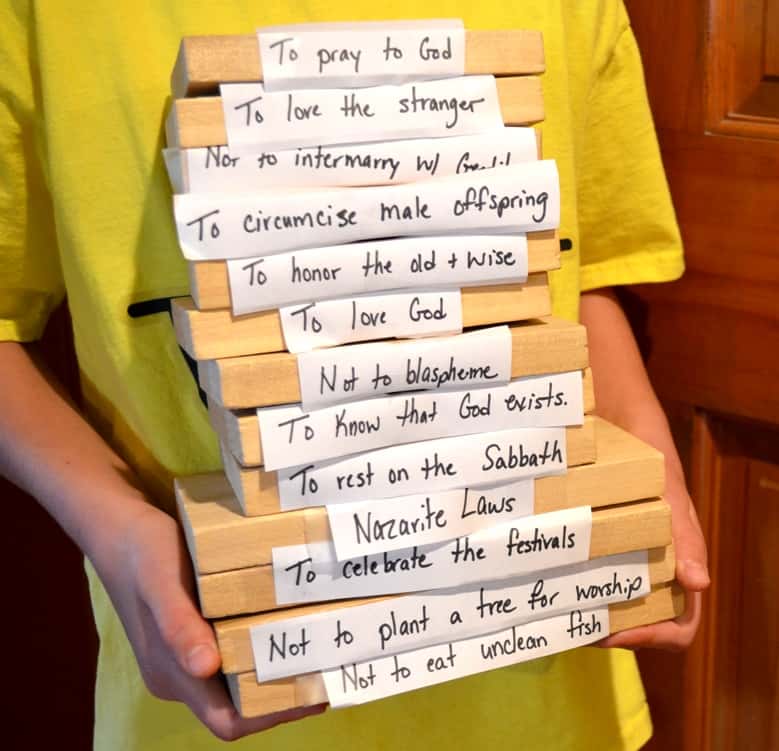 Paul and Barnabas were in Antioch after their first missionary journey. While they were there, a man began to preach in the area of Judea. He told the people that they must do certain laws of the Jews in order to be saved. This really bothered Paul and Barnabas, and they attempted to argue with this man. All of those involved decided that they should go up to Jerusalem and take the matter before the apostles and elders.

When Paul and Barnabas arrived in Jerusalem, they told the council about their travels and what they experienced. Everyone was overjoyed until a few followers of Jesus, who were also Pharisees, rose up and exclaimed that the gentiles must follow the law of Moses.

{Check on the student to see if the laws are heavy. Have him continue standing and holding the blocks.}

Then Paul and Barnabas spoke about their experiences with God and the gentiles.

Then James, the brother of Jesus and the author of the New Testament book, answered that the gentiles should not be bothered with the Jewish law. He went on the explain that a letter should be written explaining what they should do though. Gentiles were to stay away from anything having to do with idols, things that were strangled, blood, and they were to remain pure.

A letter was written. Paul and Barnabas, along with a few friends, Judas and Silas, took the letter to Antioch to read it to the brethren. All rejoiced. They stayed there for some time, and then Judas went back to Jerusalem, but Silas stayed. The men taught and encouraged the people of the church.

{Check on the student again. Have him continue holding the blocks.} 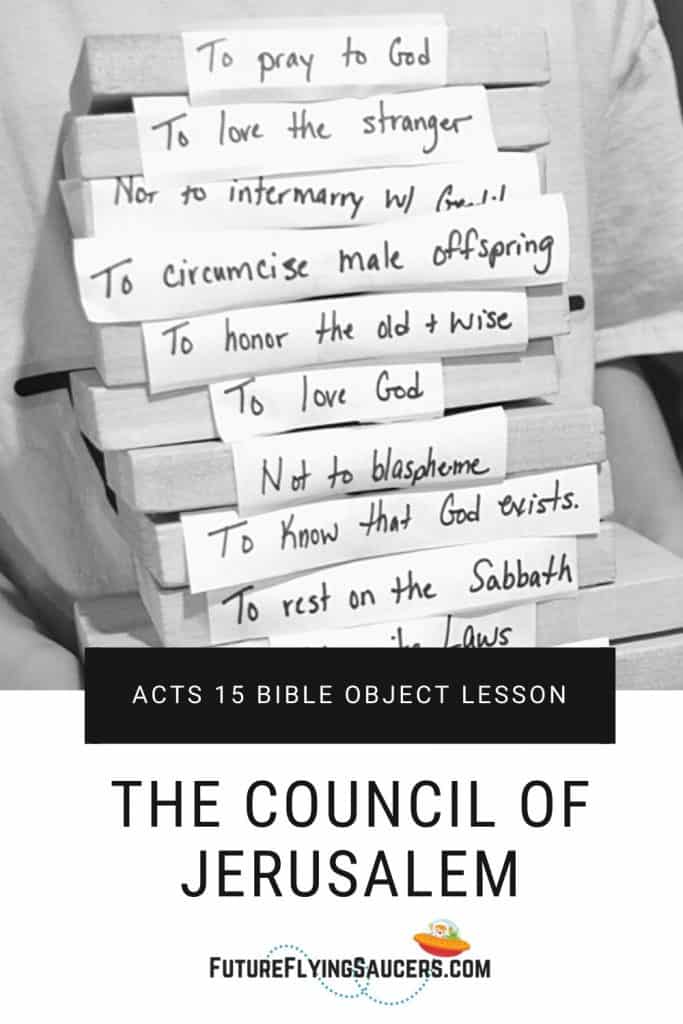 The law is heavy. The yoke that oxen wear around their necks when plowing is heavy. But Jesus said for us to give him our yoke and take His.

{Take the blocks from the student and put the scarf in his hands, or over the shoulders. Ask:} 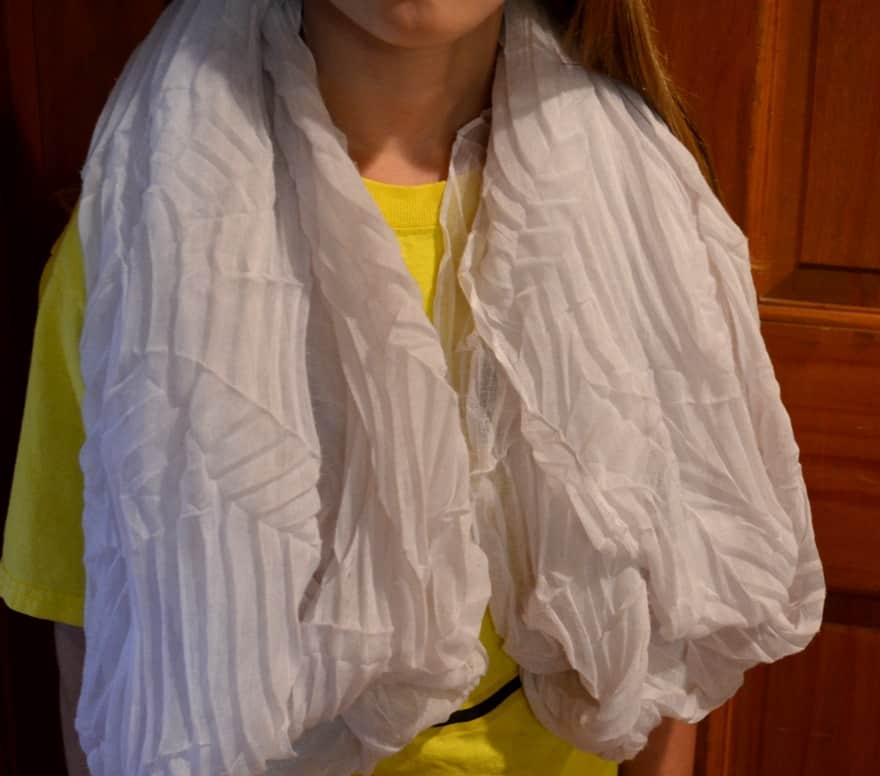 That is why we need grace. God knows we cannot follow the law perfectly. We make mistakes. Sometimes we choose to disobey the law. The law was given by God to the Jews so they could be a people set apart, holy, for Him. The law was to make the Jews righteous. The Jews failed miserably. Just read the Old Testament!

Jesus can keep the law though. And all we have to do is believe in Jesus and then we are considered righteous. Jesus fulfills all the requirements of the law. Does that mean we can go and brake all of the ten commandments? Oh no.

{Point to the scarf.}

Remember grace? When we are covered by grace, it helps us to want to obey God.

When we remember that Jesus died on the cross for us, we should want to obey God and his commandments. Do we obey all of them? All 613 of the laws? No. Remember what the Jerusalem Council said? We are to 1) stay away from idols, 2) stay away from strangled things, 3) stay away from drinking or eating blood, and 4) remain pure.

The first three requirements had to do with idol worship. The fourth tells us that we need to keep our minds and bodies pure and that comes with obeying the moral laws of God which Jesus taught. (And these include the heart of the Ten Commandments, such as anger and lust.)

The greatest commandment is to love your God with all your heart, with all, your soul, and with all your might. And the second law is like it: Love your neighbor as yourself. All of the other laws are reflected in those two. So when you encounter Jesus and choose to follow Him, His grace will motivate you to live the way God wants you to live.

What can we learn from the Jerusalem Council? Salvation is for Jews AND Gentiles. With salvation comes a life change. That means we start living our lives the way God wants us to instead of how we want to. Sometimes that means giving up certain hobbies or behaviors. God cares about your heart and wants it to reflect Him.