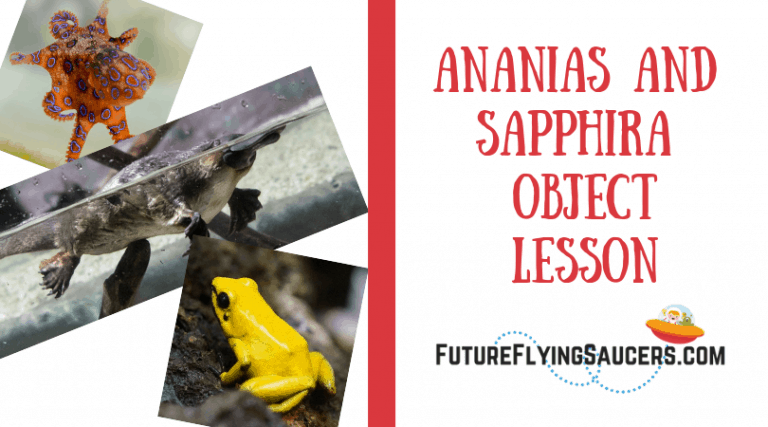 Satan is known as the Deceiver. Sin can look good, even beautiful, at times, but it is deceptive. Use images of three deceptive animals to teach this Ananias and Sapphira object lesson.

Background: After the day of Pentecost, Peter and John went to the temple to pray around 3:00 in the afternoon. At the same time, a lame man was being carried by some people and placed at his normal spot to beg for money, or alms. He was a poor man, lame from birth. The lame man saw Peter and John and asked for alms. Instead, God healed him!

I love animals! Some are really large. Others are tiny. Some are colorful, while others are drab. I have some animals for us to discuss. I am going to hold up a picture and let’s see what makes them special.

{Hold up the frog image. Ask:}

{Hold up the octopus image. Ask:}

{Hold up the platypus image. Ask:}

These animals are deceptive. The frog is shiny and beautiful. So is the octopus. And the platypus looks so fun and fuzzy! They don’t look dangerous, but they are. Sin can be that way. It looks good, even beautiful, but it can be deadly. The wages of sin is death.

After the lame man was cured, Peter and John were arrested for preaching in the name of Jesus. The High Priest told them to stop preaching, but Peter and John told him that they could not stop telling people about all the things they had seen and heard.

When people meet Jesus and know Who He is, they cannot help but be changed. However, sometimes there are those who meet Jesus and do not change because they do not understand Who He is.

People’s hearts were so changed by their faith in Jesus that they started to bring the disciples money and items to give to those who might not have anything. People like Barnabas. He sold some land and brought all of the money to the feet of the disciples. (Acts 4:36-37) But not everyone was as generous.

Ananias and his wife did not think this way. There were some things about God they did not understand. When we deal with God, we need to understand Who God is. This is why reading and knowing your Bible is so important. This is how you learn about God. Not that God is deadly and dangerous, but that God is holy, perfect and just.

Ananias and Sapphira had some land. They sold it and plotted together to keep some of the money for themselves, but *claim* that they were bringing all of the money to the disciples. This was deceitful!

Ananias came first, brought the money, and told Peter he had sold the land for an amount. But Peter, being full of the Holy Spirit asked Ananias why he would lie to the Holy Spirit? Why lie to God? Ananias dropped dead. Some men came in, picked up his body, and buried it outside.

Three hours later, Sapphira came in the room not knowing what had happened to her husband. Peter asked, “Is this the amount for which you sold the land?” She answered, “Yes.” She died immediately. The same men who buried her husband carried her out and buried her.

God takes sin seriously. He will not be mocked. 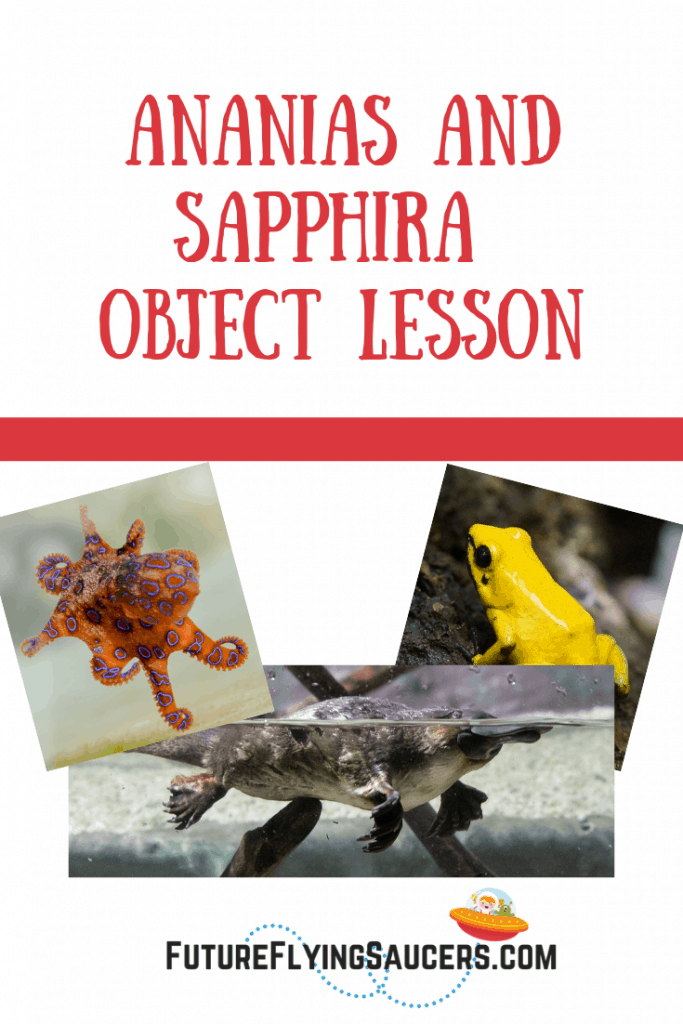 The Bible tells us that, after the deaths of Ananias an his wife, a great fear spread throughout the early believers. This fear was filled with awe knowing that God is the One who causes life and death. God is the One in charge of everything.

We must not think that we can sin and not receive the consequences of the sin. We must choose to obey God and His ways instead. After all, His ways are best for us.

{Hold up the pictures of the animals.}

These animals seem harmless, but once you really know about them you realize that you do not want to mess around with these.

Understand that there are choices and situations that might seem harmless at first, but if you will educate yourself about those things, you will realize that you should run from them.

{Choose and discuss a few age-appropriate examples. See below:}

Preschool Example: Getting mad and throwing a temper tantrum when you do not get your way, or if someone wins an game and you do not. This might seem harmless, but if you choose to do these things you hurt your relationships with other people. You might not have friends who want to play with you. What should you do instead?

Elementary Example: Taking something that does not belong to you is a bad habit to start. You might take something from your parents and then try to take a candy bar from a store. Then it might grow into shop lifting and eventually burglary. You could end up in jail. Something so small and seemingly innocent can grow to be a life changing choice. What should you do if you desire something that isn’t yours?

Upper Elementary/Middle School Example: Drugs, smoking, alcohol, and pornography are addictive substances. One joint, one beer, one cigarette or vape, or one look at a website seems like nothing. But it is not. All three of these things can ruin your relationships with people you love. Choose today how you will handle being offered each of these items. Choose to run away from them. Do not be deceived.

Sin is deceptive. People can be deceptive. If you are not careful, you could lie and deceive just like Ananias and Sapphira. If you believe in Jesus, then you have the Holy Spirit living inside of you. He is the One who can give you the power to run away from sinful choices.

It is important to understand why God takes sin so seriously. Sin and selfishness ruin families, marriages, friendships, and relationships of all kinds. We serve a God Who is all about relationships. HE is trustworthy and if we bear the name “Christian” then we must be trustworthy as well.

What can we learn from Ananias and Sapphira? God is holy and just. He wants a good relationship with those He created. That means sin must be dealt with. God loved us so much that He sent Jesus to take our sin upon Himself. He died because of your sin. In return, we should obey God and live a life that shows God that we love Him and other people.