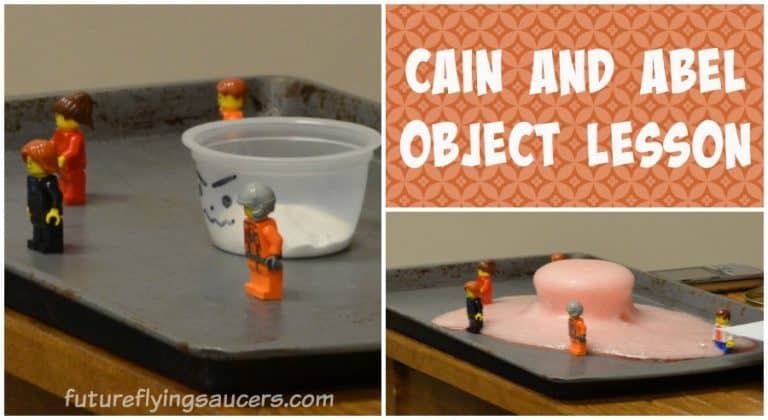 Sin is a big deal. People don’t like to admit that, but it is true. If it wasn’t such a big deal, then why did Jesus give up His life for us? Even during the beginning of civilization, blood sacrifice represented forgiveness and redemption. Knowing the difference between the offerings of Cain and Abel helps us to understand Jesus a little better. Background: Adam and Eve had eaten of the forbidden fruit and they were no longer welcome in the garden. Sin caused a broken relationship with God. Because of the sins of Adam and Eve, women now have great pain when they have babies. There is disease and heartache. Men must work hard in order to provide for their families. God placed hatred between the snake and the children of the woman. But one day that serpent will bite the heel of one of her children, and then that Child will turn around and crush the head of the serpent.

{Put the cookie sheet on a table in front of you. Have the other items to the side.}

Eve gave birth to Cain and then Abel. Her children did wrong just like you do wrong. No one taught you to do wrong things. Adam and Eve had to discipline their children as your parents discipline you. This is because all people sin. Every person is born with a nature to sin.

As the boys grew up, Cain became a farmer and Abel became a shepherd. One day both brought an offering to God. Cain brought of his first fruits of crops. Abel brought a spotless lamb. To us, both offerings seem to be acceptable. Both offerings reflect the jobs of those who were giving. But Abel’s offering was accepted. Cain’s was not.

{Show the angry cup to the children. Put it in the middle of the cookie sheet.} His emotions became violent and filled with hatred. Even though Cain had not done anything physically wrong, God could see His heart. Jeremiah 17:9 says, “The heart is deceitful above all things, and desperately wicked.” When we are born, we are born sinful. our hearts are yucky with sin. We have a sin problem and so did Cain. God went to Cain and asked, “Why are you angry? Do what is right. Sin is waiting for you!” Cain did not listen to God. Instead, he went to talk to his brother, Abel, and killed him in a field.

God went to Cain again and asked, “Where is your brother?” Cain responded angrily, “Am I supposed to take care of my brother?” God replied, “What have you done? I hear your brother’s blood calling from the field.”

God wanted Cain to think about what he had done. Conviction, realizing you have done wrong, can be a hard lesson to learn. Because we sin, we are then convicted once we have done wrong.

Cain allowed the sin to grow in his heart; and the anger and jealousy that he felt overwhelmed not only Cain, but his brother Abel. When we choose to sin, it bubbles out of us and can hurt those around us. Cain went and killed his brother. Sin can destroy not only those who sin, but those who surround the sinner.

{Put Lego people around the cup. Add the vinegar to the mix of baking soda in the cup. Watch as the sin takes out the Lego guys.} 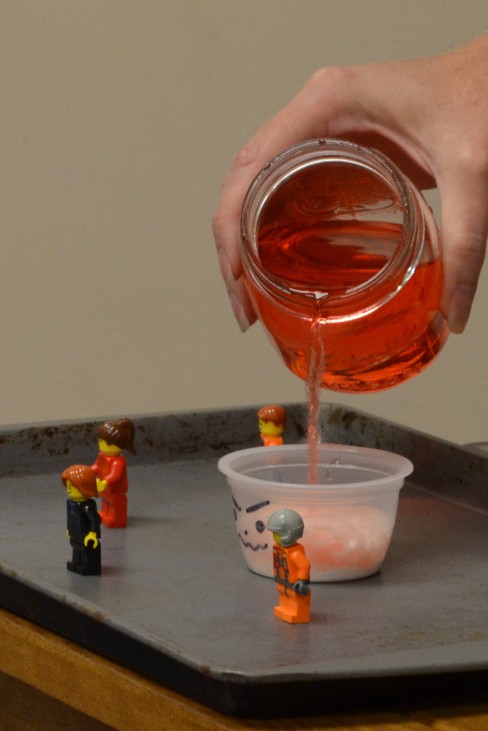 Life Application of Cain and Abel:

We need to pay attention to our hearts. We need to think about the people around us. God gives us second chances to change our behavior and do what is right. Scripture tells us that when we are tempted to do wrong, there will always be a way out. God gave Cain a chance to do better and to have his sacrifice accepted. All he had to do was sacrifice a lamb and he would have been forgiven. Blood must be shed for forgiveness. God encouraged Cain to change and He told him that sin was waiting at his door, ready to come in.

Many times, even before we do something wrong, God will talk to our hearts with a small voice and warn us to not do that wrong thing. Sometimes that voice tries to stop your thoughts. You need to listen to it.

And if you do choose to sin, God, who is the judge, will use the Holy Spirit to convict us of our sin. You get awful feeling inside when the Holy Spirit convicts you. It’s called feeling guilty. And because we sin, we have to pay a penalty. Cain’s penalty was to be a wanderer, a fugitive, for the rest of his life. God said that the ground would never produce for him again. He would never stay in one place to live. When you sin, you deserve a penalty.

We are not alone in our sin. That Lego guy got wiped out by the other person’s sin!! We are not in our sin alone. Decisions we make effect other people. We need a solution to this sin problem! Sin may be fun and look like fun at the start, but in the end, sin is no fun. No one is truly happy in sin. But it is wonderful to know that God gives us second chances to do the right thing!

Our sin means we have a penalty. Scripture says that the penalty for sin is death. Something or someone has to die. God sent Jesus to earth. Jesus, who was perfect and not guilty, took our penalty instead. He died on the cross and blood was shed.

What can we learn from Cain and Abel? Life is in the blood. The penalty for sin is death. Jesus took our penalty and it is His blood that sets us free from sin.