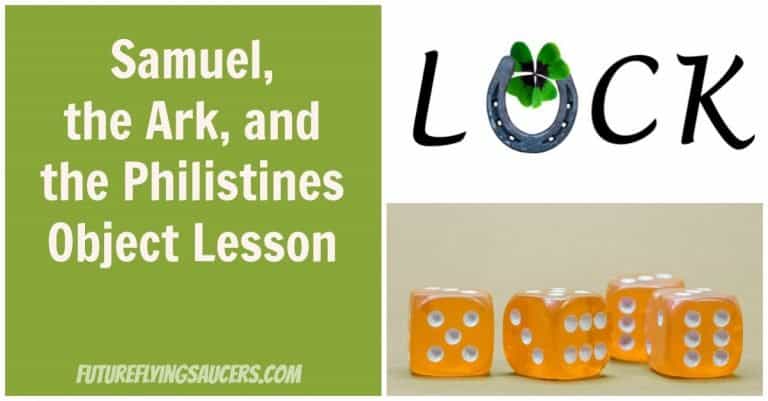 Samuel, the Ark, and the Philistines Object Lesson

Do you ever blow the dice before a game? Does your favorite team rub a rock before charging down a hill to play football? What habits of “luckiness” exist around you? In this Samuel, the Ark, and the Philistines Object Lesson children will learn that God is not a good luck charm and that blessings come from obedience.

Materials: a “lucky” item, like a rabbit’s foot, or a ball cap

{The Bible Atlas and Companion is a fantastic resource. It has beautiful maps; and for this lesson there is a map and a picture of the ark of the covenant.}

Background: During the years of the judges, there was great sin and darkness. Once Joshua died there was no leadership, no king, and no government. Each tribe did it’s own thing. The people fell into gross idolatry and gross immorality to the point that “everyone did what was right in their own eyes.” BUT God did not forget His promise to Abraham and He was at work through a young Moabite lady named Ruth. Through Ruth, God would bring about a king and THE King.

The Israelites had the tabernacle where the priests and levites ministered to God. But even there, God’s voice was silent because of the amount of sin in the land. {Hold up the “lucky” item. I used a baseball cap and told the kids it was my “Lucky Bible Teaching Hat”. It was quite funny because I proceeded to tell the story and got all of the numbers wrong! [Accidentally!] The kids thought it was great and that my hat didn’t help at all! Ask:}

Many people enjoy having “Lucky” items, or things that they think might bring them good luck. People want to win ball games. They want situations to turn out good results. {As you tell the events, have the map nearby so you can follow the ark as it moves.}

During the time of the Judges, a father and mother had a baby. That baby was Samuel. Samuel was raised in the temple and served the Lord. When Samuel was a boy, “The word of the Lord was rare.” In fact, when Samuel heard the Lord’s voice, he thought it was Eli.

Samuel heard a voice say, “Samuel! Samuel!” After three times of going to Eli to ask what he wanted, Eli told Samuel that it must be the Lord speaking to him. Eli told Samuel to tell the voice, “Speak, for your servant hears.”

The next Samuel heard the voice, he responded, and Samuel received his first prophecy from the Lord. God told Samuel that He was going to take the priesthood away from the family of Eli because of the evil doings of Eli’s sons. The next morning Eli asked Samuel about what God had told him. Samuel told him.

Israel and the Philistines went to war at Ebenezar. Israel lost about 4,000 men and wondered why they had been defeated. Israel was defeated. They went into the tabernacle and some priests (Hophni and Phinehas, Eli’s sons) brought the ark of the covenant out of the Holy of Holies so they could take it to battle with them.

The army of Israel took the ark of the covenant into battle with them hoping they would win, like maybe God was a good luck charm. It didn’t work. In fact, not only did the army lose 30,000 men, but the ark of the covenant was captured by the enemy! During the battle Eli’s two sons were killed. When Eli heard about his sons’ deaths and that the ark had been captured, the he fell backwards, broke his neck, and died. Therefore the prophecy of Samuel came true. The Philistines took the ark to the town of Ashdod. They put it into a temple that was for a grain god called Dagon. They went to bed. In the morning, the statue of Dagon was on its face in front of the ark. The people righted the statue. The next morning, the statue was on its face again and the hands and head had been broken off. The Lord was against the people and they had tumors grow on them and diseases.

They built a new wagon, yoked two mother cows to it, put the ark on the cart and sent it down the road. It traveled to Beth-Shemesh, which was a Levite town. But they didn’t know how to treat the ark and some of the men looked into it and died. They passed the ark on to Kiriath-jearim where it stayed for 20 years.

Samuel was now grown up and told the people to meet him at Mizpah. They did. And he told them that they had been sinning against God and they needed to repent. The people did, and while they were sacrificing to God, the Philistines decided to attack. The Israelites attacked in defense and WON.

God is not someone to trifle with. He takes sin seriously. The Hebrew people were being defeated because they were disobedient to God. He allowed them to have consequences for their actions.

If everyone was doing what was right in their own eyes, then why should God help them?

Relationships are formed between two persons. Our relationship with God is between us and God, you and Him. If we listen to God as Samuel did, then God will speak and bless. If we only consider God on our terms, then He’s not going to work “magic” for us.

The Israelites were strong against the Philistines the second time because their relationship with God was strong again. This does not mean that if we are close to God nothing bad will happen to us. The Philistines STILL attacked. The difference was that God was with His people and gave them strength to stand up to the enemy.

What can we learn from Samuel and the Israelites? Good luck charms are not what we need. We need God to help us in everything!