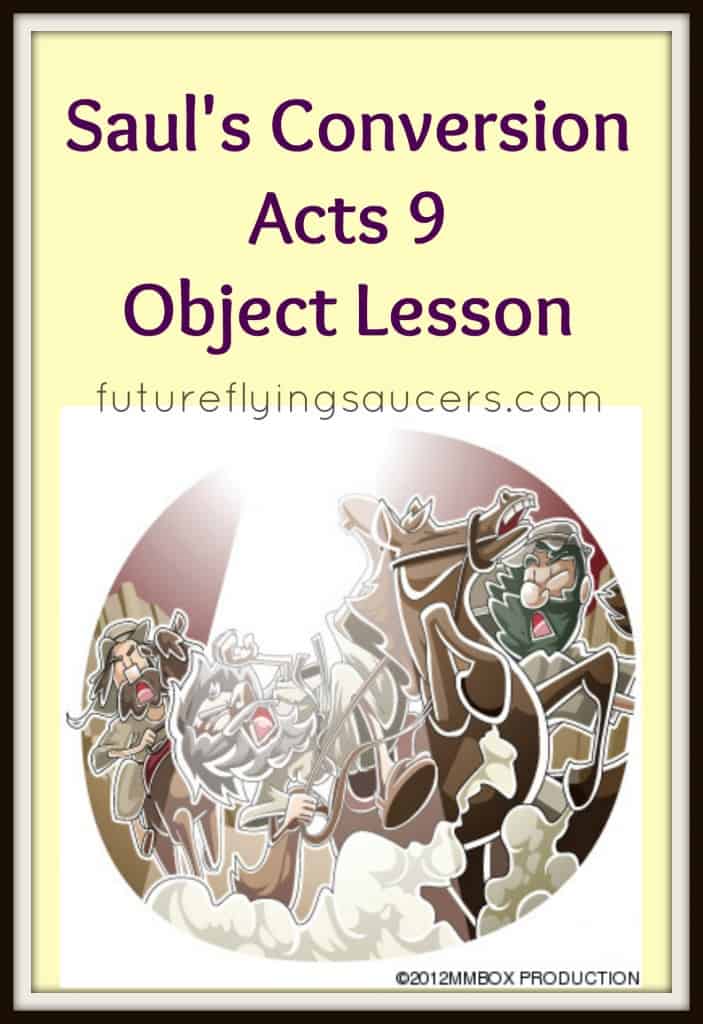 Background: Persecution of the early church had begun with the death of Stephen. And so the Christians fled from Jerusalem. They went to Judea, Samaria, and to even farther lands. Philip went to Samaria and preached Jesus to the people. There he encountered the Sorcerer, and then he was led to meet an Ethiopian.

What is a vessel? (A container that is empty that can be filled, for example, with water.) {Show the vase to the children.} This is an empty vessel. What can we put in here? (water, flowers, etc) A vessel can also be called an “instrument.” Not a musical instrument, but a tool that can be useful. God considers us to be vessels, or instruments, and Saul is a great example of one for us. 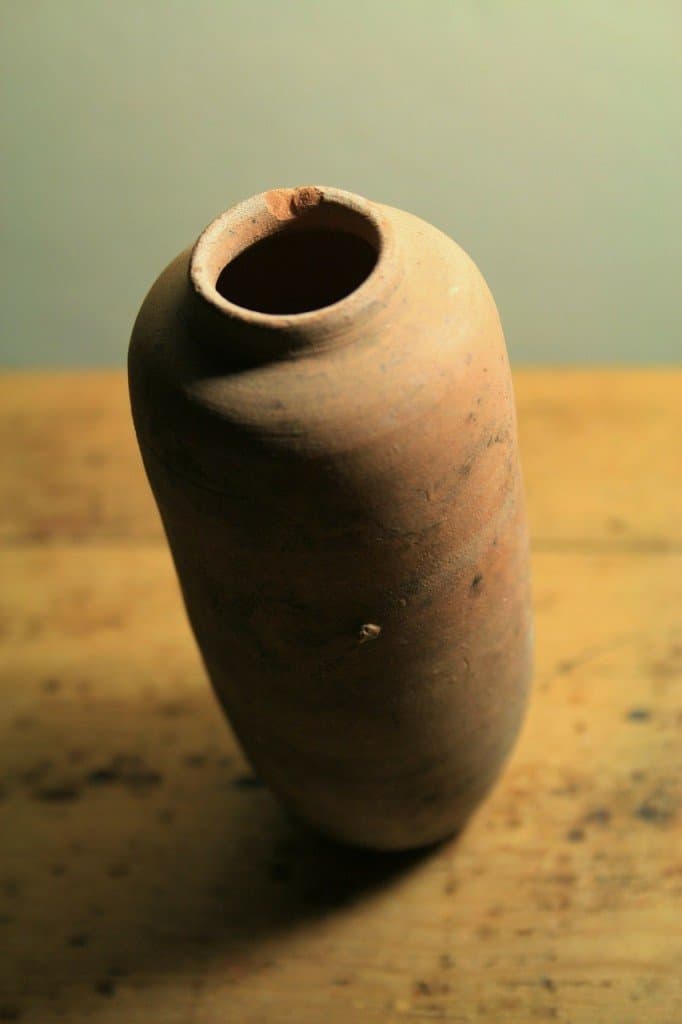 At whose feet were the cloaks cast when Stephen was stoned? (Saul’s) In Acts 8 we talked about Saul running around after the church like a cow in a china shop. He was trying hard to destroy the church. Scripture tells us that he “breathed” threats and murder against the church. He went to the High Priest and asked for permission to go to Damascus to arrest those of “The Way.” Papers were granted and Saul, and some other men, set off.

When Saul was almost to Damascus, a blinding light from heaven caused Saul to fall to the ground. A voice said, “Saul, why are you persecuting me?” Saul answered by asking who was speaking to him. The voice answered, “Jesus.” Saul asked Jesus what He wanted him to do. Jesus told Saul to go into Damascus and that he would be told what to do. When the light was gone, Saul was blind and the men around him had heard the voice, but had seen no one. The men led Saul into the city. 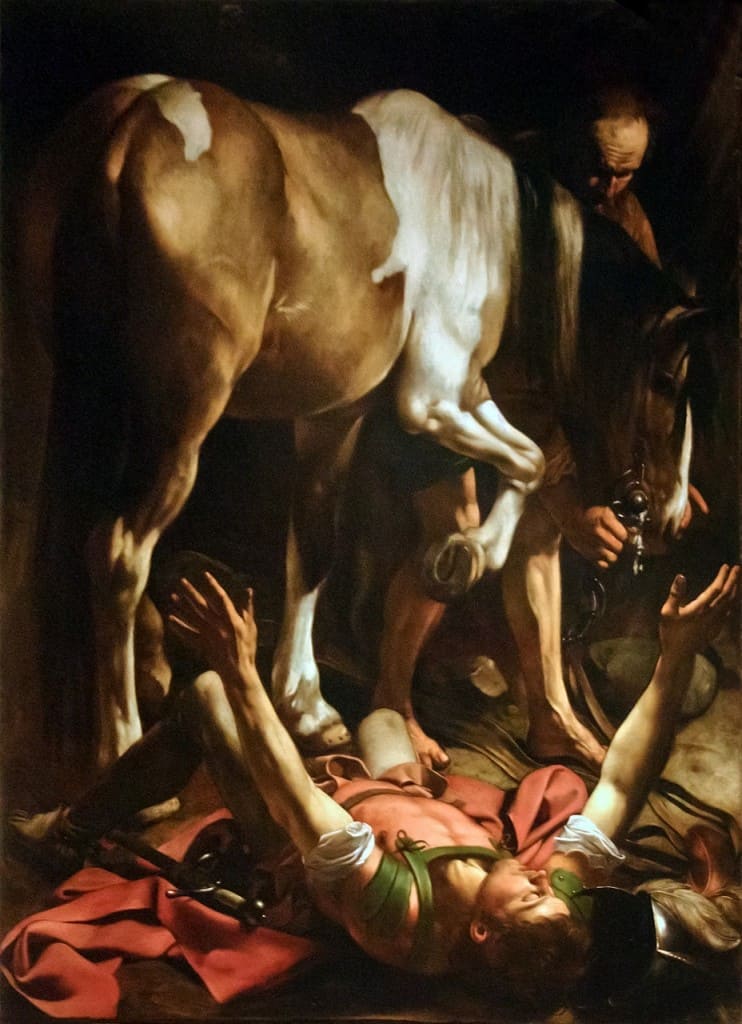 Ananias was a man of “The Way” who was in Damascus. The Lord spoke to him in a dream and told him to go to a street called Straight and that he would find Saul of Tarsus there. He told Ananias that Saul would have a vision of a man named Ananias who would come to him and give him back his sight.

Ananias had heard about Saul and he told what he knew to God and that Saul had the authority to harm the saints. The Lord replied, “Go, for he is a chosen vessel of Mine, to bear My name before the Gentiles, kings, and the children of Israel.” So Ananias obeyed and went to Saul. He found him in a house, laid his hands on Saul and said, “Brother Saul, Jesus has sent me to you that you might regain your sight and be filled with the Holy Spirit.”

Something like fish scales fell from his eyes and Saul could see once more. Saul arose and was baptized. He ate food and his strength returned. 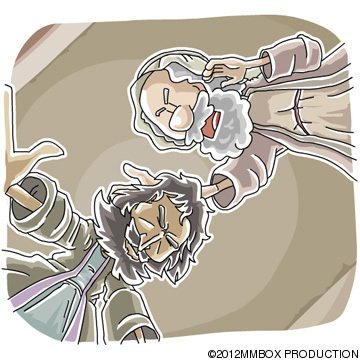 After spending a few days with the disciples of Damascus, Saul went to the synagogue and started preaching that Jesus was the Son of God. Everyone was amazed because they knew that Saul was one who was AGAINST Jesus. But Saul became even more strengthened and he confused and baffled those who tried to argue with him, which proved that Jesus was the Christ.

Saul’s life is radically turned around. He started out against Jesus, and then once he met Jesus, he preached Jesus. When salvation takes place, a radical change should happen in our lives. How we used to do things, or used to live, should change. What we watch on TV, books we read, words we say, actions we do, activities we are involved in should change to reflect a life that promotes Jesus to those around us.

God called Saul a vessel that He had chosen and was going to use. Paul wrote a letter to the Corinthians where he talked about being a vessel. I wonder if he was thinking about his experience with Jesus. He wrote about how God causes the light to come from the darkness and that the light shines from our hearts because we know God. Then he calls us earthen vessels which hold this treasure, this knowledge, this power from God.

Later, Paul (aka Saul) told Timothy how to become a vessel of honor by fleeing thoughts and actions of immaturity and pursuing righteousness. That’s what God wants from us. Righteousness, faith, love, and peace will allow us to be vessels, or instruments, ready to do good works for Jesus, just like Saul eventually did.

{Use Saul’s conversation to present the gospel.}

On the way to Damascus, Saul was walking a road of sin, evil, and murder. Even though he loved God, Saul did not believe Jesus was God’s Son, or the coming Messiah. We walk a road of sin as well. All have sinned and fall short of the glory of God.

When Saul met Jesus through the blinding light, he realized who Jesus was and Saul believed. Saul knew that Jesus had died on the cross and risen again after three days. When Jesus told Saul Who He was, Saul did not question Him. A person knows when he encounters Jesus. There is no question. And if there is, then talk to God to see if you really have met Jesus. You must believe that Jesus is the Son of God as well.

Saul asked Jesus what he was to do, which tells us that Saul was ready to surrender everything he was and had to Jesus. Saul fasted for three days waiting to hear from God. He knew he had been wrong. Saul had been humbled and now he waited to hear what God required of him. After we meet Jesus we should be ready to confess whatever wrongs we have done and surrender everything we are to Jesus. Then we can anxiously await to see how we can serve Him.

Once Ananias came and told Saul what Jesus expected of him, Saul regained his sight and was filled with the Holy Spirit. Saul publicly showed his new life in Christ through baptism and telling others that Jesus is the Son of God.

If you have a new life in Christ, then you are filled with the Holy Spirit as well. Be public about your change of life. Jesus wants to use you as a vessel. He wants to pour Himself into you so that you then pour yourself into others by loving and serving and sharing Jesus with them.

Other Resources for Acts 9:

What’s in the Bible? Video of Paul’s Conversion

Elijah and the Prophets of Baal Object Lesson

Fill out the form below to receive a Free Printable Bible Lesson for children ages 5 to 12.