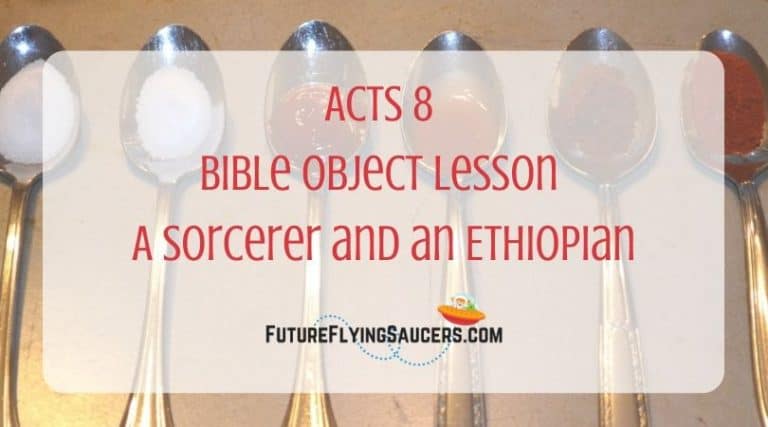 Acts 8 Bible Object Lesson: A Sorcerer and an Ethiopian

Can we be sure that we are saved from our sins? Use this Acts 8 Bible lesson about a sorcerer and an Ethiopian to explore the idea of experiencing God and total heart change.

Scripture Focus: Acts 8 {This is a lot of scripture. You can either narrate the events or have older children read the scripture sections.}

Background: More and more people were joining the early church each day. Because there were so many people, seven men, or deacons, were chosen to serve the people and one was Stephen. Stephen was the first martyr of the church. 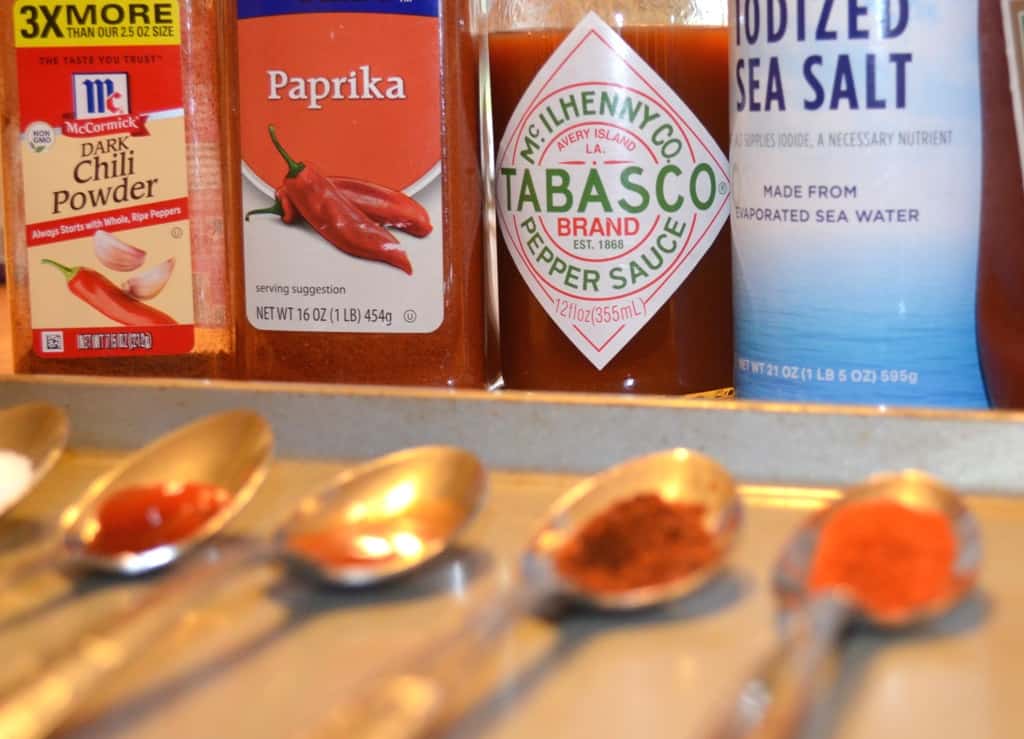 {Set up the pairs of food on a cookie sheet. Do not allow the children to see you setting this up. Try to make the matching foods look exactly the same. Choose a volunteer(s) who will handle the taste-testing with a fun attitude. You could use a volunteer for each food pair. Lead them to taste the “bad” version first.}

We are going to do a taste test. I am going to give you a food to try and I’m going to tell you what I think it is. You tell me if I am correct or not.

{Give the spoonful of shortening. Ask:}

{Give the spoonful of frosting. Ask:}

{Continue with the other 2-3 foods you chose.}

These food pairs look a lot alike. The only way to really know what they were was to taste them. We will come back to this in a minute. 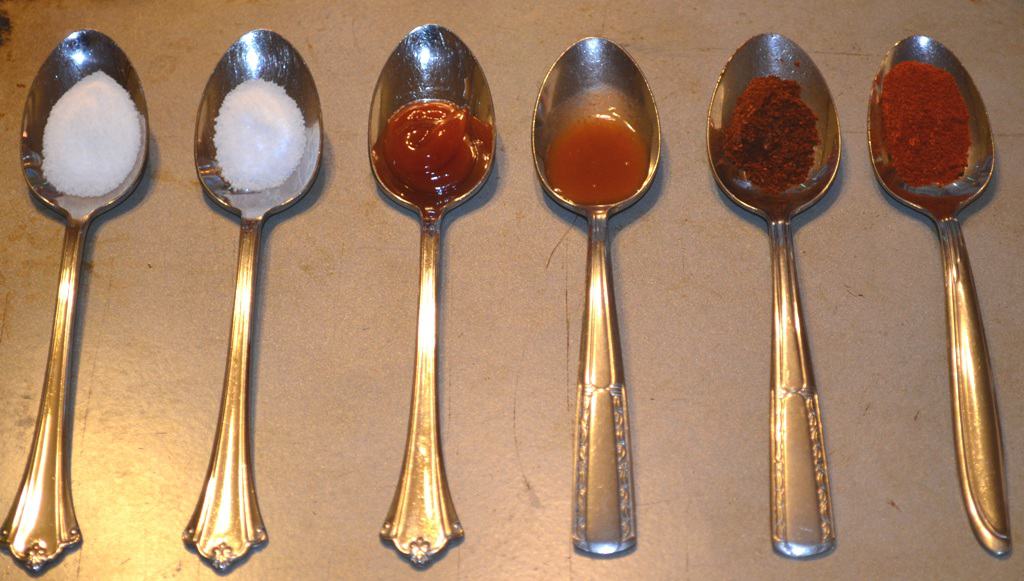 When Stephen was stoned, those who were throwing the rocks laid their cloaks at the feet of a young man named Saul. He agreed with the stoning. He was a Pharisee, loved God, and loved God’s law. He knew that these people who followed Jesus were wrong and were causing trouble. So he went after them.

That is what happened when Saul went after the early church. Everyone scattered. He arrested men, women and children, and even had people put to death. Persecution of the early church began with the death of Stephen.  Christians fled from Jerusalem. They went to Judea, Samaria, and to even farther lands.

Another deacon was named Philip. Like Stephen, he was a man of good reputation, wise, and full of the Holy Spirit. He is known as Philip the Evangelist. All people who love Jesus are told to help spread the gospel, but sometimes God chooses specific people to totally dedicate their lives to preaching Jesus to other people. And that is what Philip did.

Philip went to Samaria and preached Jesus to the people. There was a man name Simon the Sorcerer, who had made, and claimed, himself great in the community by practicing sorcery so that all the people said that he had great power. Philip started preaching and people started to believe him and in Jesus. Lives were being changed and people were being baptized. Simon followed Philip amazed at all of the miracles and wonders that happened through him. Simon decided to believe in Jesus and be baptized as well. 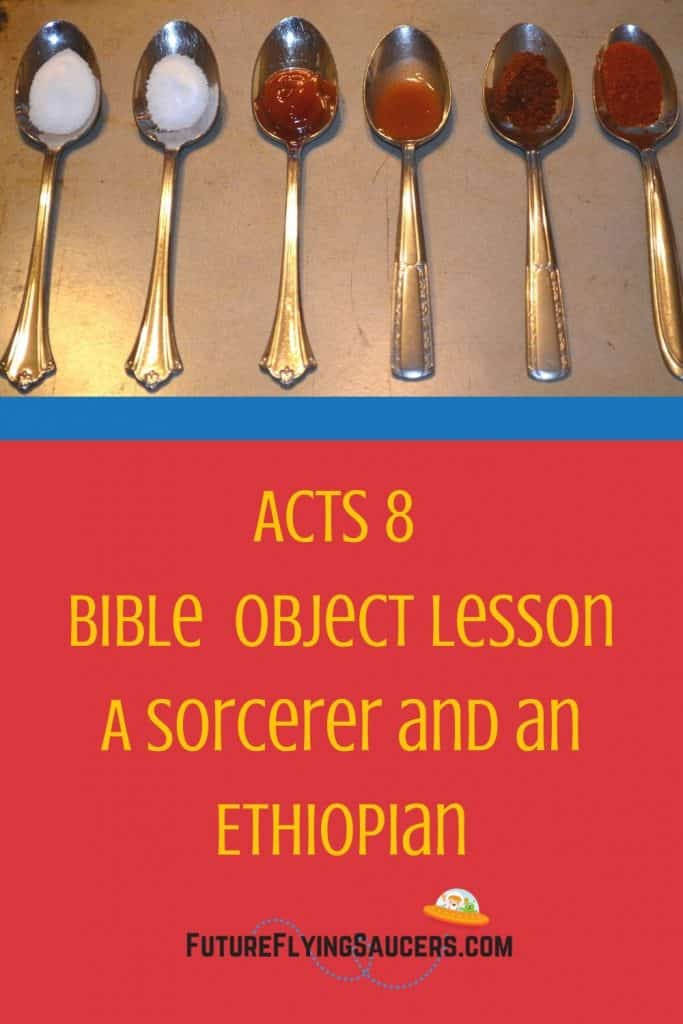 For some reason the Holy Spirit had not come to these new Christians after they had been baptized. So Peter and John went to Samaria. When they laid their hands on the people, the Holy Spirit filled them. Simon watched this and exclaimed to Peter, “I want the power to do that! How much can I pay you?”

Peter looked at him and rebuked him! He told Simon that a gift of God cannot be purchased with money, that Simon was full of bitterness and sin, and that he needed to repent and maybe he could be forgiven. Simon asked Peter to pray for him so that the things Peter said would not happen.

Meanwhile, an angel appeared to Philip and told him to travel to Gaza. He obeyed right away and without question. In the distance he saw a chariot. The Holy Spirit told Philip to go and overtake the chariot. When Philip was close, he heard the man reading from the Old Testament book of Isaiah. The man in the chariot is called the Ethiopian Eunuch in scripture, but he probably was from a nation just below Egypt and not from Ethiopia. This man was the Treasurer for Queen Candace, which is a title like “Pharaoh” in Egypt. “Candace” is the title, not the name of the Queen.

Philip asked the man, “Do you understand what you are reading?” This man who was great in his country and rich in influence said, “How can I? I need someone to help me.” Philip joined him in the chariot and proceeded to preach Jesus to this man. They drove past some water and the man asked if he could be baptized. “If you believe in Jesus with all your heart,” Philip replied.

The Ethiopian Eunuch was baptized and afterwards the Spirit caught Philip up. He appeared in a town about 20 miles north of Gaza.

As for the Ethiopian, he rejoiced and returned to his country.

Let’s think about what was the same for Simon the Sorcerer and the Ethiopian. Both had heard Philip preach the gospel. Both had said they believed in Jesus and both were baptized.

Just like the food we had, the food looked the same on the outside. Both Simon and the Ethiopian had done the same things.

Once the food was tasted, you could tell something wasn’t right.

Simon: Before Philip came, Simon claimed that he was great, when he was not. He practiced sorcery and trickery to get the people to listen to him. Even though Simon said he believed in Jesus, he did not have the Holy Spirit in him and he knew it because he wanted to pay Peter for God’s power. Therefore, he did not believe in Jesus with his whole heart. The scriptures tell us that even the demons believe in Jesus and are fearful of Him.

This scripture shows us that people can say words, they can say a prayer, they can answer all the questions correctly, they can be baptized, and they STILL do not have a changed, humble, repentant heart for Jesus.

Ethiopian: He was great in his country, but humble because he knew he did not understand what he was reading. He asked for help and God supplied it through Philip.

The Ethiopian shows us what salvation and repentance look like. He humbled himself so he could know God’s Truth, and he confessed about Jesus by saying, “I believe that Jesus Christ in the Son of God.” After he was baptized, he left rejoicing. And it is probably because of this one man and his influence that began the Christian church in Africa.

You had to experience the foods to find out if they were what they were supposed to be.

Sin is everything we think, say, and do that is not pleasing to God. We all sin and fall short of what God wants from us. Therefore God sent Jesus. Jesus died instead of us. Jesus took our place. And if we believe with our whole heart that Jesus died on the cross, came back to life after three days, and is now in heaven with God, then God forgives our sins and gives us eternal life. We are saved from our sins. And when we know Jesus saved us from our sins, then with a humble heart we should want to surrender everything we have to Him.

What can we learn from a sorcerer and an Ethiopian? Words do not save you. Being baptized does not save you. Only believing in Jesus with your whole heart will save you from sin and death.