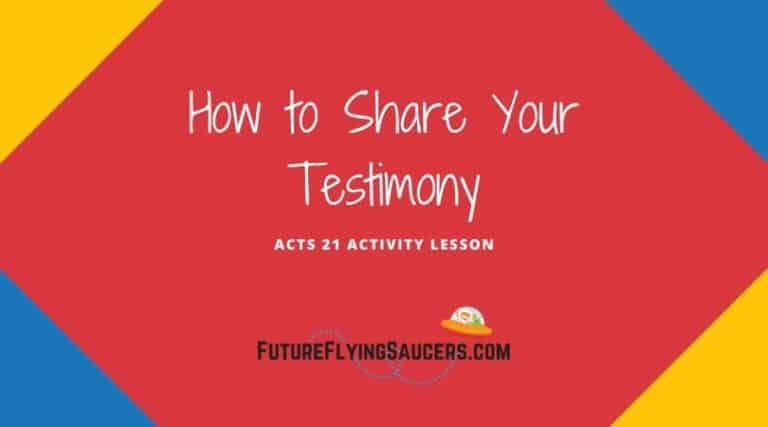 What is a testimony? How do you get one? What should you do with it? Discuss these questions and more with this Acts 21 Bible Activity lesson about Paul in Jerusalem.

Background: Paul’s third missionary journey was over and he followed the prompting of the Holy Spirit to go to Jerusalem knowing that trials awaited him. He visited Herod’s Temple, which was the same temple Jesus visited. When Paul was younger, he studied under the Pharisee Gamaliel.

{Cut the shape of a cross out of the red sheet of paper. On the other sheets of paper write the word BEFORE on one and AFTER on the other.}

Everyone who chooses to believe in Jesus has a “Jesus Story.” Every story is different.

Before people meet Jesus, they are one way.

{Show the cross. Put it to the right of the BEFORE sign.}

When people choose to follow Jesus there is a spiritual change inside of them. Spiritually, people transform from darkness to light, or from the old man to the new man, or unrighteousness to righteousness. Those are different ways to explain the same process.

{Show the AFTER sign. Put it on the right side of the cross.}

After this spiritual change takes place, a person is…just that, changed. Behaviors change. Habits change. Actions change. These changes don’t necessarily happen fast. They may take years to change. However, after a person meets Jesus and decides to follow Him, life looks different because they focus on how God wants them to be instead of them trying to figure things out on their own. 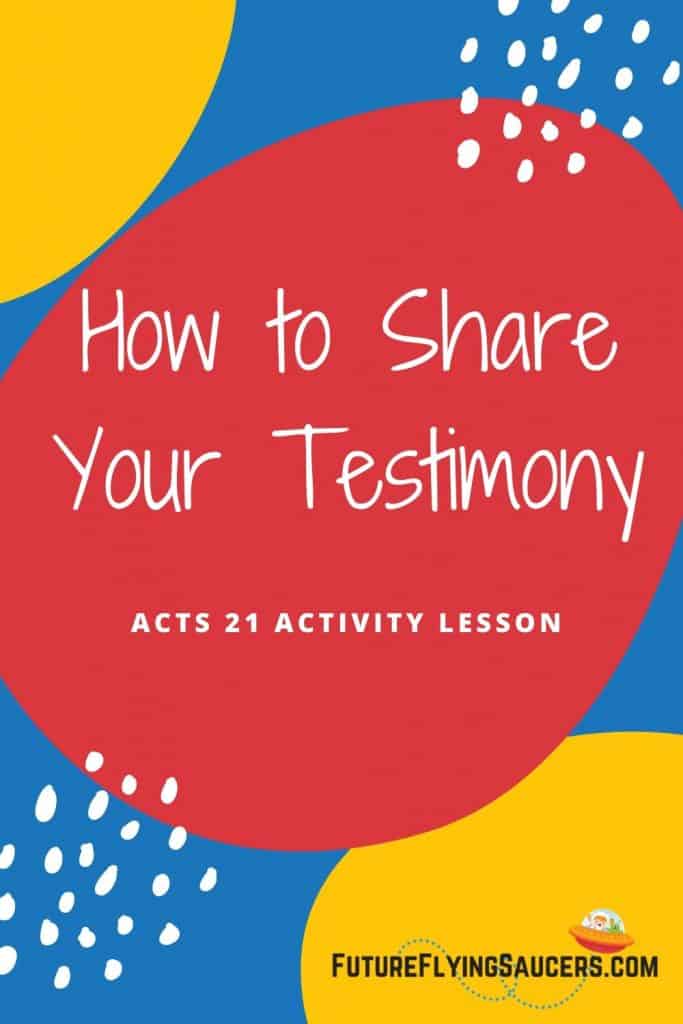 Paul has a great example of a testimony.

{Show the three signs. Choose three children. Give one sign to each. Explain:}

{Read Acts 21:26-40. Depending upon the age of the children, you might want to tell this part of the event and read only Paul’s testimony. Ask:}

These vows were probably Nazirite vows which Jews would take periodically for different reasons. Some examples of people with Nazirite vows from scripture would be Samson, Samuel, and John the Baptist. During their time of vow, the Jews would not drink anything from grapes and would not cut their hair. So Paul was to go with them and pay for the men to have their heads shaven, which would show the temple leaders that the vows were complete and that Paul really did still abide by the Jewish customs.

While the Jews were seeking to kill Paul, the Commander of the Garrison heard about the uproar and immediately he and some soldiers went to the area. They stopped the beating of Paul, placed him in two chains and asked the crowd who this was and what he did. There were conflicting answers so that the Commander could not figure out the truth so he started to take Paul to the barracks. When they got to the stairs, soldiers had to carry Paul because of what the mob did to him. As Paul was leaving, the crowd began to say, “Away with him!”

Paul would not have missed the gravity of this moment. The soldiers were taking him to the Antonia Fortress which is across the Court of the Gentiles from Herod’s Temple. The staircase the soldiers were using would take Paul up to the very platform where Pilate presented Jesus to the multitude.

Paul asked the Commander if he could speak to the crowd.

Paul told his story, but when he got to the part about Jesus telling him to go to the Gentiles, the mob began to yell and scream. The Commander ordered Paul to be brought into the barracks and whipped. Paul explained to the Commander that he was born a Roman.

Immediately Paul was unbound, but the Commander still wanted to understand what was going on. He released Paul, but commanded the Chief Priests and the counsel to appear before him and Paul was to stand before them.

And thus the trials begin.

It is quite possible that Paul literally stood in the footsteps of Jesus. Paul knew that suffering was going to take place in Jerusalem. But he went anyway and he went boldly in the Lord. He knew who he was. He knew the calling God had placed on his life and he was not ashamed. He shared his testimony in front of everyone in the temple.

{The children you are teaching may or may not have a “Jesus Story” or testimony. Be sensitive to those who may not have chosen to follow Jesus yet. Consider sharing the gospel with them. Share a short version of your testimony. As you do, hold up the signs BEFORE, the CROSS, and AFTER describing how your life changed because of Jesus. Ask:}

{Choose the Centurion and review his story holding up the signs. His testimony is different because he didn’t physically meet Jesus, but he was told the gospel and he knew he needed to repent. Ask:}

What can we learn from Paul telling his testimony? Paul was always ready to tell how Jesus had changed his life. He was not ashamed of his background and he knew that Jesus had transformed him into a new man. If you have a Jesus Story then you had a new beginning as well. You are not walking in darkness anymore, but in God’s light!