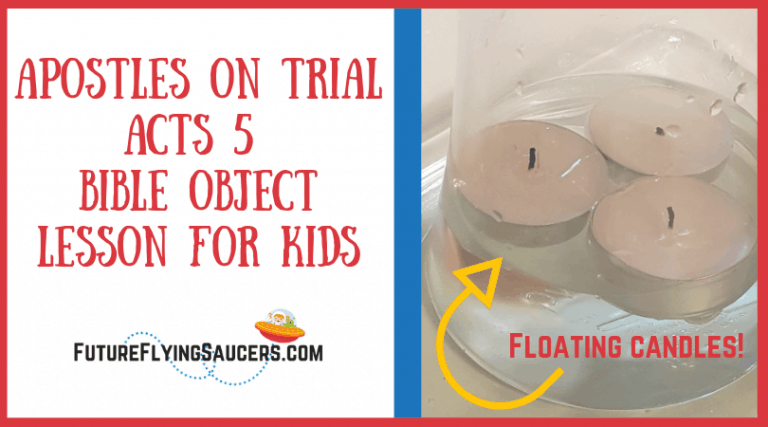 When life is good, it is easy to thank God for blessings. What about during times of suffering? Did you know that suffering has a purpose? Use this object lesson about the apostles and suffering to teach children that thanksgiving through suffering produces the assurance of salvation. 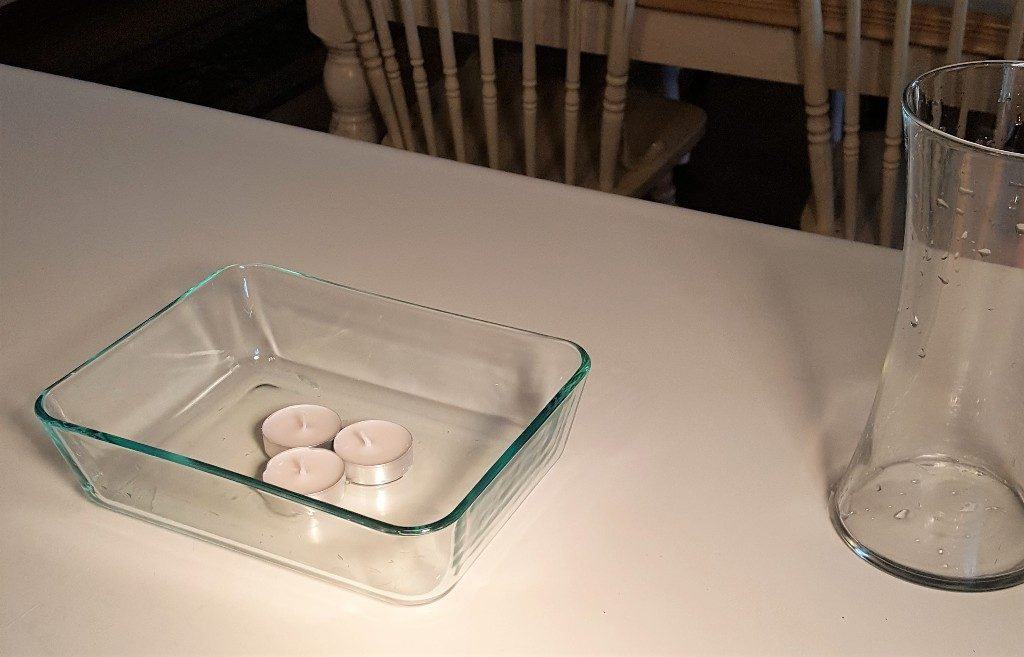 Background: The Holy Spirit descended upon the disciples in the upper room and more and more people joined the new church. Miracles and preaching caused an uproar in Jerusalem.

Object Lesson for Apostles on Trial

{Place the 3-4 tea lights in the middle of the glass baking pan. Light the candles.} 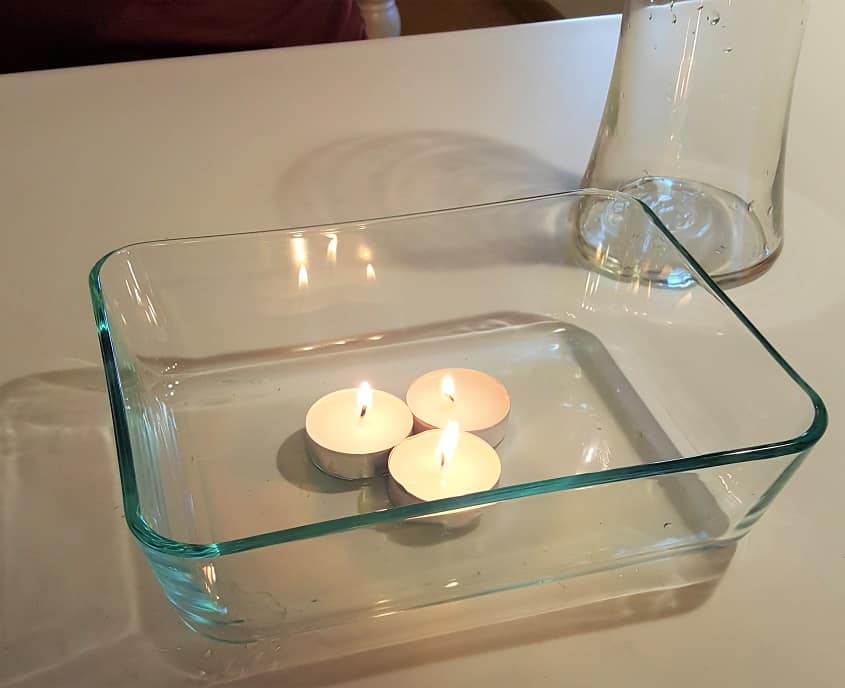 When Jesus was on earth, He told people that His disciples are to be like lights on a hill in a dark world.

The Apostles were those who spread the teachings of Jesus. Even today, if you spread the gospel and teach others about Jesus, then, by definition, you are an apostle.

Bible Lesson for Apostles on Trial

The apostles of the early church experienced power like they had never known. The church was of one mind and one spirit and amazing things happened! More and more people came to know Jesus. The people were so amazed by what they saw, that they brought the sick out to the streets just so the shadow of Peter might fall upon them and they would be healed. Every day the Apostles went to the temple, at Solomon’s Porch where the lame man had been healed, and preach about Jesus.

The High Priest was not happy. In fact, he led the Sadducees, and they arrested the apostles and put them in prison. That night, an angel of the Lord came to the prison cell, opened the doors, and brought them out. The angel told them to go back into the temple and preach.

And so the apostles obeyed and went back to the temple in the morning to teach.
Meanwhile, the High Priest called for the apostles to be brought to him. The guards went to get the prisoners only to find that they were not there. The guards were outside the doors and no prisoners were inside!!

The High Priest and the others of the council did not know what to do. While they wondered, a person came up to them and exclaimed that the prisoners were all teaching in the temple again.

The captain of the guard brought the prisoners to the High Priest without any violence because the guards were scared of the people in the temple. The High Priest said, “Didn’t we tell you to stop teaching in this name?” Peter replied, “We ought to obey God rather than man. We are Jesus’ witnesses and we have also been given the Holy Spirit. Therefore we obey God.”

The Jewish Council was furious and they plotted the death of the apostles. Then a wise Pharisee name Gamaliel stood up and spoke to the group. He said, “If this movement is of man, it will fail and disappear. If it is of God, you cannot overthrow it, because you would be fighting against God.”

The Council agreed. They beat them, commanded them to stop teaching in Jesus’ name, and let them go.

The apostles rejoiced as they left the temple. They were thankful to suffer for Jesus. And the next day they returned to the temple to preach and teach in Jesus’ name. They were being lights on a hill.

Suffering with an attitude of Thanksgiving. That sounds a little crazy to us. These apostles were beaten, scolded, people were plotting their deaths, and yet they rejoiced because they were suffering in honor of Jesus. They were thankful to be used by God.

Look at the lights in this pan. They are glowing and seem so happy!

But when bad times come, or we suffer for the name of Jesus, it is hard to be joyful and let our lights shine like the apostles did.

{Pour enough water into the glass baking pan to that the water line is almost to the top of the tea light candles. Turn the glass vase upside down and place it over all of the candles. The fire should go out and water should be sucked into the vase allowing the tea lights themselves to rise on the water.} 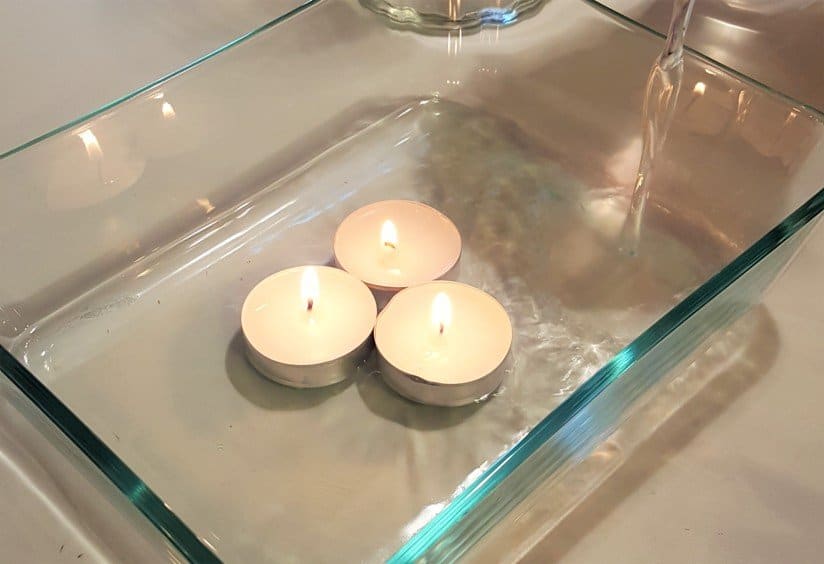 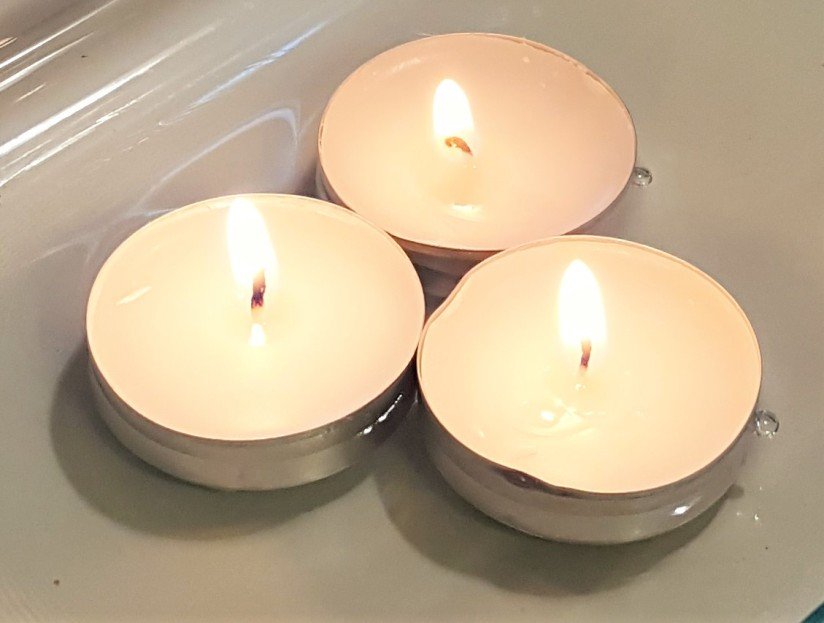 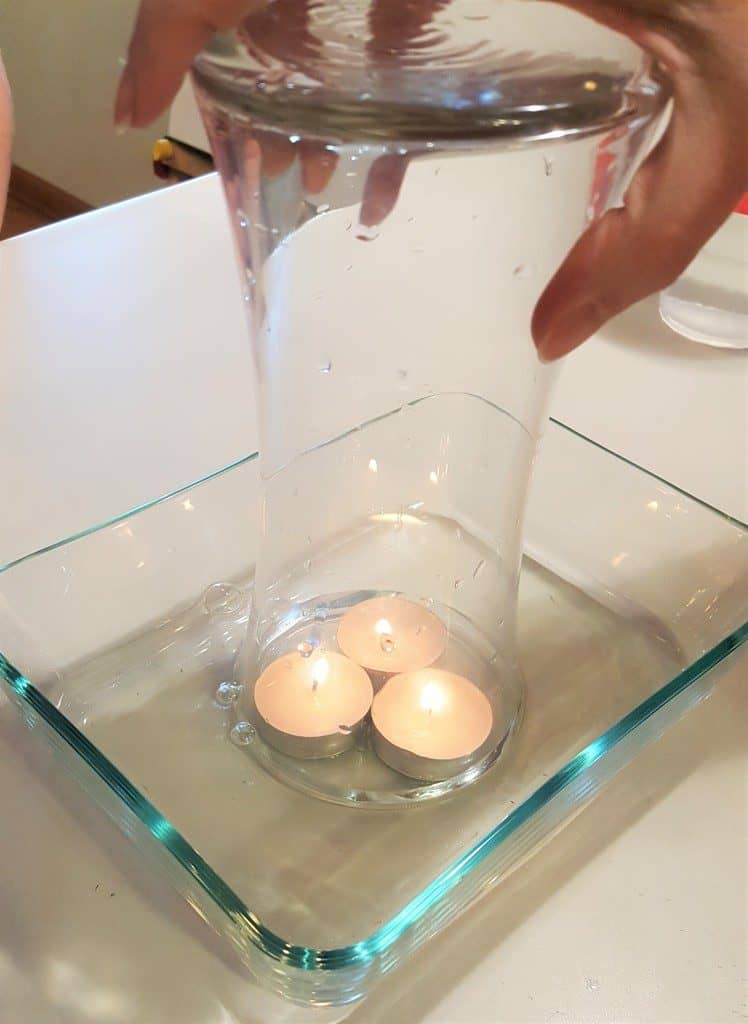 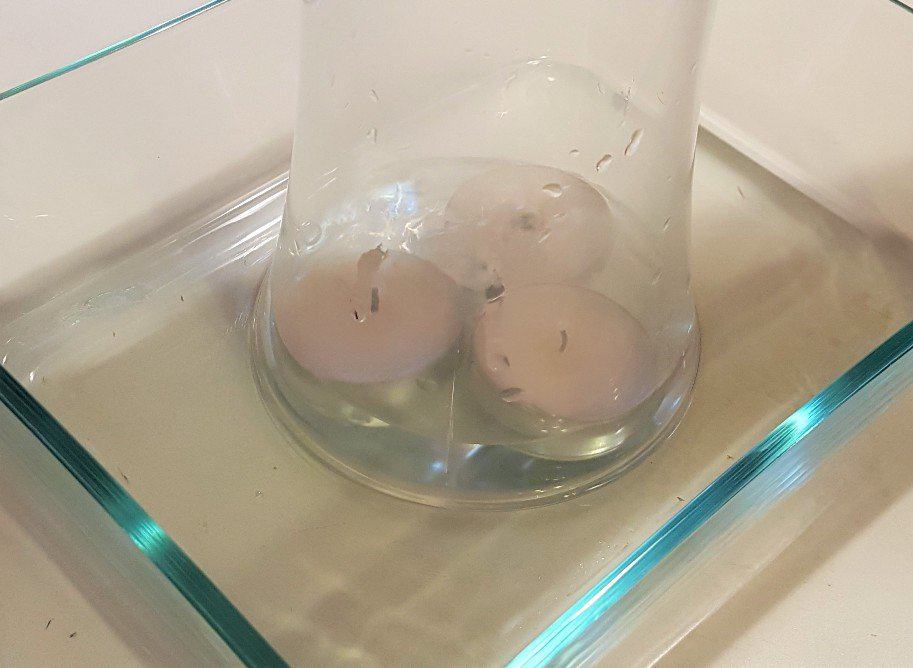 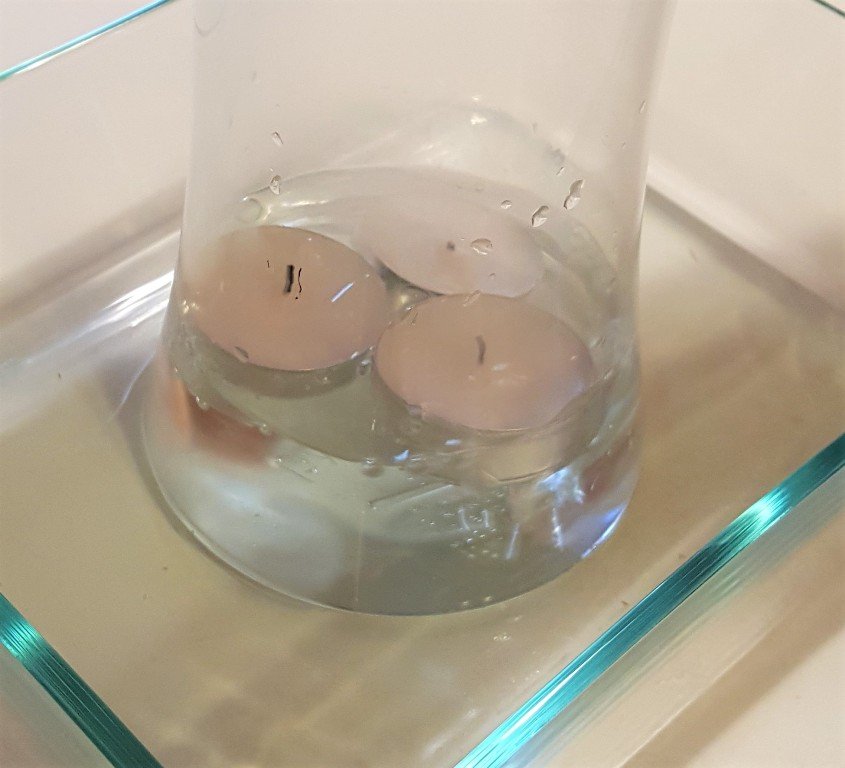 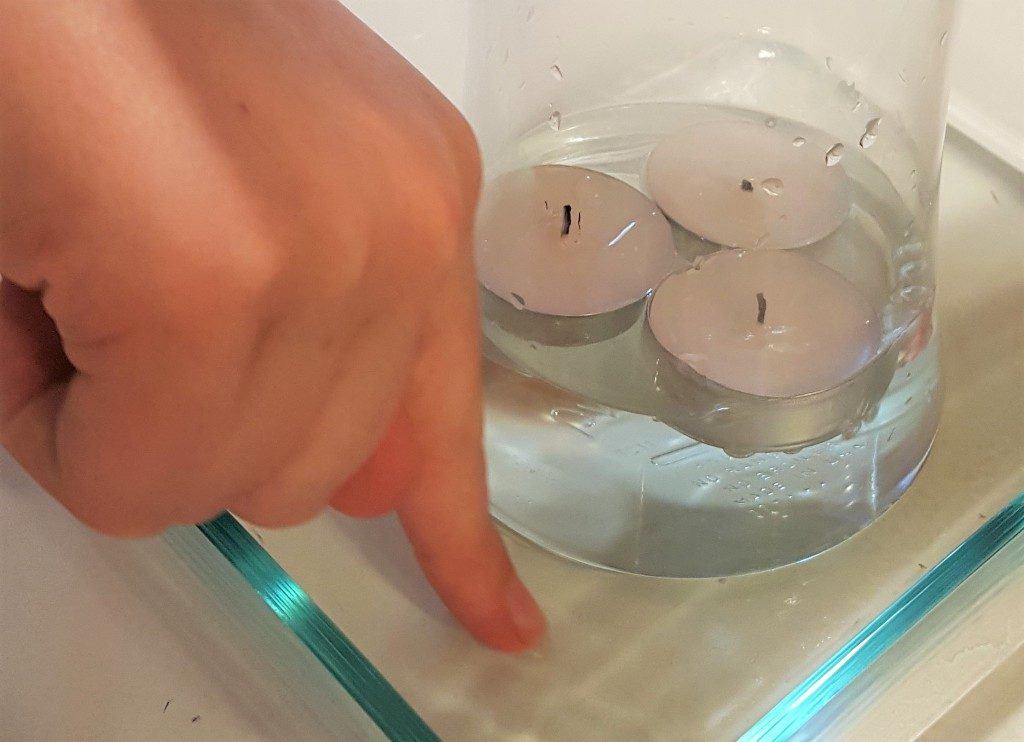 Suffering is a strange thing. We share our lights every day when things are going well, but when suffering comes along it seems that our lights go out, like these candles.

When the apostles were thrown in jail, I wonder if they thought their lights had gone out. They could not tell lots of people about Jesus while sitting in a jail cell. And even when they were released a second time, the apostles had been beaten and told they could not preach about Jesus any more.

Even though the lights of our candles went out, they rose up in the air. The water was under them, pushing them up.

The apostles suffered in jail and they were beaten, but they responded with rejoicing and thanksgiving. Jesus was with those apostles through all of that suffering. Jesus, the Living Water, was there to lift them up and encourage them even when their light was dim or out.

In the United States we do not really know what it is like to suffer, or be persecuted, for believing in Jesus. Yet there are people in other countries who are not allowed to have Bibles, claim to be a Christian, or go to church. If they do, they could be arrested, put in jail, and even killed.
The Bible tells us that our salvation is perfected through suffering (Hebrews 2:10). We are also told to rejoice in our suffering because God uses it to strengthen our character, or who we are (Romans 5:3-4). Christians are supposed to offer sacrifices of praise and thanksgiving (Psalm 107:22 and 116:17).

What is sacrifice? It’s the giving up of something, the surrendering of ownership. So the apostles, through their beatings and afflictions, were not only sacrificing their physical bodies, but they were sacrificing who they were as people.

They were telling the Jewish Council that Jesus and His message of salvation was more important than their lives. What was the worst thing the Jewish Counsel could do? Kill them? That would allow the apostles to enter heaven and eternal glory. And that is a Christian’s hope. There is no sadness in that.

I will sacrifice to You with a voice of thanksgiving. I will fulfill what I have vowed. Salvation is from the Lord! ~ Jonah 2:9

What can we learn from the Apostles on trial? We can be thankful and joyful when we suffer in life because God uses hard times to teach us more about Who He is. He teaches us to rely upon Him and not ourselves. He teaches us how to pray during hard times as well. Through suffering, God teaches us that we must depend upon Him to lift us up. 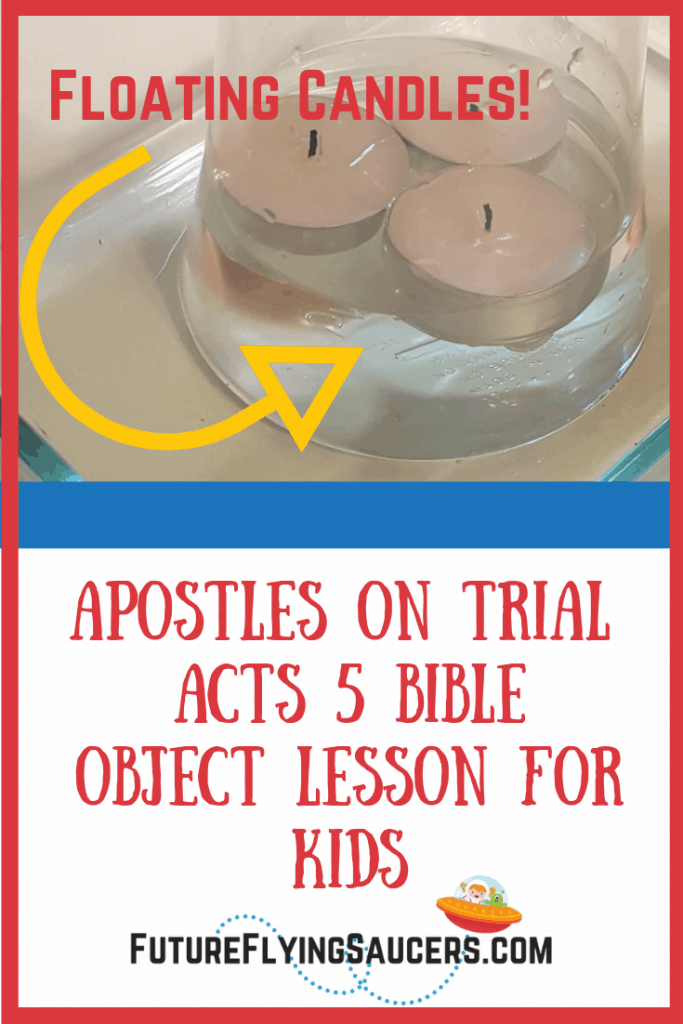