The End of the Old Testament Bible Lesson ~ Ezra, Nehemiah, and Esther 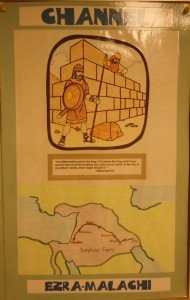 Background:
Nebuchadnezzar of Babylon descended upon Judah and Jerusalem. He destroyed the city and the temple. He took the people of Judah captive and they went into exile. The first group of people he took were all of the rich, intelligent noblemen. These included Daniel, Shadrach, Meshach, and Abednego. Nebuchadnezzar attacked a second time and took any craftsmen back to Babylon. The third time, any one who could be a servant was taken. Probably the only people left in Judah were those who were the poor, the crippled, and the elderly. And Judah was in captivity away from her land.

Main Events of Ezra, Nehemiah, and Esther:
Judah had been in captivity for 70 years. In the book of Ezra, we learn that King Cyrus of Persia was in charge of the land formerly known as the nation of Israel. King Cyrus allowed Ezra, and any other Jew, to go back to Israel. Israel would not be its own nation again, but was more like a colony of Persia. About 50,000 Jews returned to their homeland to rebuild. But many people never returned. Ezra brought back the law and the prophets and he and the people rebuilt the temple. A little bit later, Nehemiah, under King Darius, returned to Jerusalem and rebuilt the wall around the city. One of the issues that the people were dealing with was hostility from those who had moved into the country during the exile period.

The story of Esther took place a little bit later during the restoration process. The King of Persia had banished his queen and needed a replacement. There was a huge beauty pageant and Esther, a Jewess, won. The king’s right hand man, Haman, hated the Jews, including Esther’s uncle, Mordecai. It was Haman’s passion to kill, annihilate, the Jews. Esther heard that her uncle was upset about something and asked why. He responded with the information about Haman and that all the people would be able to attack any Jews on a  certain date. He pleaded with her to go to the king, but Esther was not allowed to go to the king without being called. After a few days, Esther boldly went to the king…and asked him, and Haman, to come eat with her. She did this twice. The king was so pleased that after dinner he asked her what she wanted. She fell down before him and pleaded for her life and the lives of her people. Enraged at hearing what Haman had done, Haman ended up being hung on the gallows which had been built for Mordecai. Esther saved her people from destruction. 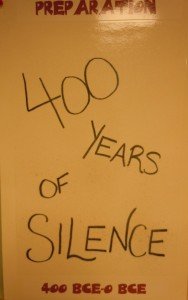 At this point, the history of the Old Testament is over. The prophets had spoken. God’s glory had left the temple. God was now silent. Four hundred years would go by. During those years the Greeks took over the Persian Empire. Then the Romans took over the known world.

Life Application of Ezra, Nehemiah and Esther:
God’s name is never mentioned in the book of Esther and then He is silent. What is God doing? Even when we don’t think we can see or hear from God, that doesn’t mean He isn’t busy preparing for something. Not all of the Jews moved back to Israel, which means there are Jews scattered all across the nations. They can’t go back to the temple, so they built synagogues. The Greeks brought about a common language, and the Romans built roads for travel. Political groups have formed: the Sanhedrin, Scribes, Sadducees, Pharisees, Publicans. and Zealots. God may not have spoken, but everything was now in place to bring about the greatest plan ever!

What Truth did you learn from this lesson?