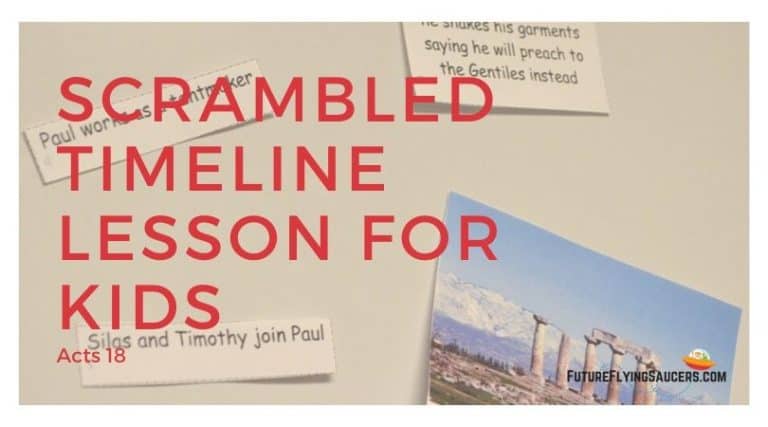 Paul met many friends throughout his missionary journeys. Use this Acts 18 scrambled timeline activity to discuss a series of events and the people Paul met along the way.

Background: Paul is on his Second Missionary Journey with Silas. Paul went to Lystra and invited Timothy to join them. In Philippi they met Lydia. Paul, Silas, and Timothy went to Thessalonica. Paul and Silas left during the night and went to Berea. But then the Jews from Thessalonica came to town. They began to stir up the crowd. The new church sent Paul away by ship, but Silas and Timothy stayed behind. Paul traveled to Athens. He told the people that His God had made all of the stone, gold, or silver used to “make” their gods. Paul explained that God was the Creator of all things. After Paul finished and he was mocked, he left Mars Hill. 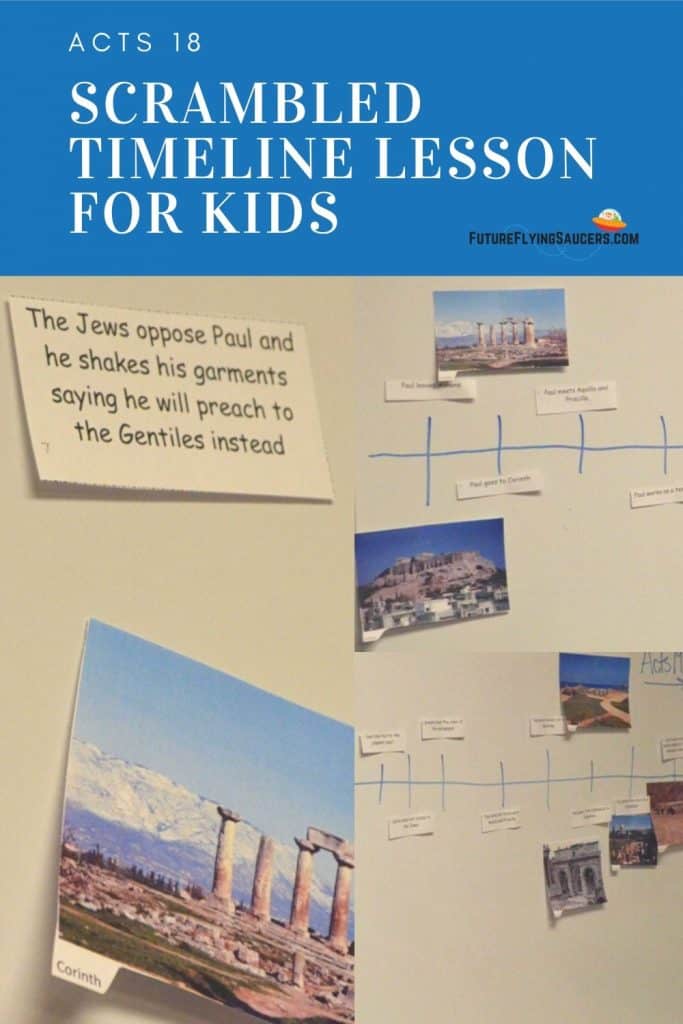 {This chapter in Acts has many different events that are interesting to read. Cut apart the events and create a  timeline as you or the children read Acts 18. I used a white board to create a class timeline and had the kids read the chapter from their Bibles and tell me where to put the info. For older children, give them their own timeline pieces to glue onto a sheet of paper.}

Here are a few tips for setting up and implementing your timeline lesson:

Draw the timeline on the paper or the board with 20 dashes. Number the events with a small number so you know the order they should be in. Cut apart the timeline events and the pictures. Scramble the information. Be sure to have the name of the location on the image. This will help the children understand that the events that took place in the chapter took place in a real location. Read Acts 18 and slowly add the events and images to the timeline. I thought that the kindergartners and 1st and 2nd graders would have had a hard time with this activity. While it was a challenge, they stepped up, dug into their Bibles, and plowed through it beautifully!! I was SO impressed!! Friends are important in ministry. While in Corinth, Paul made new friends while waiting for his old friends to arrive. While new friends are great, it wasn’t until Silas and Timothy arrived that Paul began to preach with boldness.

Apollos was another preacher, like Paul, who traveled around preaching about Jesus. He may have been a better speaker than Paul. While Apollos was accurate in his teachings, his knowledge about baptism was not quite complete. Aquilla and Priscilla could have denounced the man and argued with his teaching publicly, but instead, they drew Apollos aside and taught him. They acted like friends.

God never intends for us to minister to people on our own. God has “many people in the city.” If you think you are the only Christian in your school classroom, or in some other group, ask God to show His people to you. It might be a teacher, another student, or someone you never considered. God wants us to be bold when telling others about Him, and He will always provide the people you need.

What can we learn from Paul and his second missionary journey? Christians are made for community. We are to learn from and encourage each other. The scriptures are filled with normal people doing their best to follow Jesus, just like you and me.