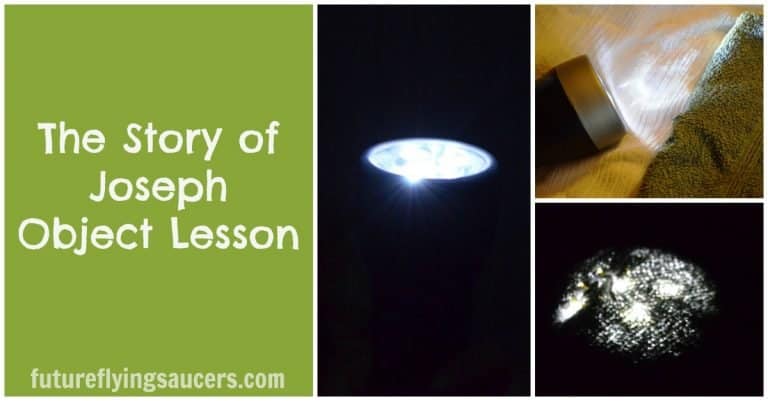 The Story of Joseph Object Lesson

God makes many promises in the Bible. But sometimes we are so busy that we either miss them, or expect those promises to happen quickly, in our time. God doesn’t work that way though. He makes wonderful promises and fulfills them when HE wants them to happen. This story of Joseph object lesson will help your children understand that they can still be lights in the darkness, even when God is not in a hurry. Scripture Focus: Genesis 37-47 [This is a lot of scripture, but in order to show that God works in His time for His glory, we need to see the big picture of Joseph’s life.]

Abraham had passed the 4 part covenant on to Isaac, who passed it to Jacob. Jacob’s name was changed to Israel. Jacob was the father of 12 sons. Abraham, Isaac, and Jacob are known as the Patriarchs of the Jewish nation of Israel.

During all these years, Egypt had combined the Upper and Lower kingdoms to create one nation of Egypt.

Object Lesson and Main Events of the Story of Joseph:

{Turn on the flashlight. Ask:}

{Put the washcloth over the lens. Ask:}

Jacob had 12 sons. The 11th son’s name was Joseph and God used him in a powerful way. In everything Joseph did, he allowed God to shine through him, even when he went through darker, more difficult times.

The history of Joseph is interesting because he’s one of the only people we learn about from his childhood until his death. It is important to note, that scripture tells us that Jacob loved Joseph more than the other brothers. Because he loved him more, he treated Joseph differently. When Joseph was young, we made some unwise choices when it came to his brothers, and even to his mom and dad, at times. Joseph was a sinner, just like you and me.

Here are the main events that happen in Joseph’s life:

{As you go through the life of Joseph, shine the flashlight bright during the times when God was near to Joseph. Cover the light when God seems far away and bad things happened.}

Life Application of the Story of Joseph:

Once he was sold into slavery, Joseph needed to grow up quickly. He made better choices. He relied on God. Joseph allowed his light to shine continuously, no matter his circumstances. Joseph knew God had a plan for his life. He just didn’t know when, or how, it would all take place.

{Turn on the flashlight. Ask:}

If we have Jesus as our Savior, then His light is inside of us wanting to shine in everything we say and do.

The first thing that has to happen is to make sure that Jesus is you Savior. You can do good works and still be dead to sin. Once you are alive in Christ, then your works are different.

Joseph worked for God…and the Bible tells us that God was with Joseph and allowed him to succeed.

When we decide to have Jesus as our Master and do works for Him, then we are a light to whomever is around us.

Like Joseph, we may have to make tough and sacrificial decisions in order to obey the Lord. Like Joseph, we might go through dark times and have to deal with being forgotten. But we must always remember that God was with Joseph and He blessed Joseph. If we stick with God, He’ll do the same for us. And because of Joseph’s loyalty to the Lord, God used him mightily to bring about His promise.

One thing that is SO neat about Joseph is that he KNEW God’s promise would happen. Joseph knew that God would make of Abraham’s family a great nation. He didn’t know when, but before he died, Joseph told his family to be sure to take his body with them when they left Egypt to occupy the land that God has promised. Remember, they were now living in Egypt, so mummification would allow this.

It took another 400 years, but God works in His time to do amazingly great things!

What can we learn from Joseph? No matter the circumstance we might find ourselves in, if we decide to live the way God wants us to live, then we will be a light that shines in the darkness.

More Resources for the Story of Joseph: