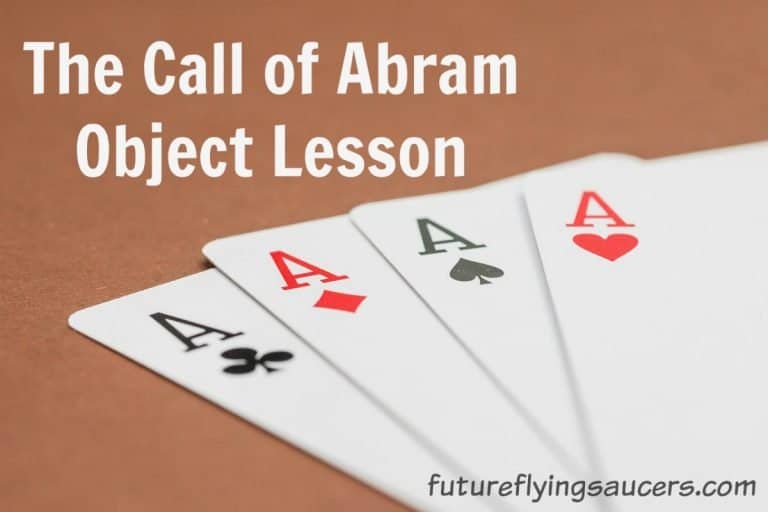 The Call of Abram Object Lesson

Promises. We all make them. We all break many of them. Yet God has made hundreds of promises to us and not once has He broken them. Trusting God to be Who He says He is and that He is going to do what He says He is going to do is vital to our foundation of faith. This Object Lesson on the Call of Abram and His Flight to Egypt will encourage children to trust in the One True God. Geography: locate the fertile crescent, Ur, Haran, and the land of Canaan

Background: After the tower of Babel, the people spread out across the land. About 8 generations after Shem, Terah was born. Terah’s sons were Abram, Nahor, and Haran. Haran died and left his son Lot. Abram’s wife was Sarai and she was barren. Abram’s father, Terah, moved his family from Ur to Haran, and at 205 years old he died. It’s in Haran that God approached Abram with a promise.

Object Lesson for the Call of Abram:

{Fan the cards in front of you showing the backs of the cards to the children.}

{Place the stack of cards face down in front of you.}

You and I start playing the game. Soon you notice that I am winning lots of books. You also notice that as soon as you draw a card, I ask for the same card.

Bible Lesson for the Call of Abram:

A man named Abram lived in Haran. His wife’s name was Sarai. They had no children. One day God spoke to Abram. The Bible does not tell us why God chose to talk with Abram. Perhaps he was a man who walked with God. We do learn later on in Hebrews that Abram had faith in the Lord, as did Sarai.

{Use the bold words to create a list to help memorize of the 4 fold promise of God to Abram. These 4 things are important to remember. Go over the list with the children 3-4 times.}

Abram obeyed God and left Haran. He was 75 years old. Sarai and Lot went with him. They traveled and God led them to the land of Canaan. There God appeared to Abram and told him that this was the land He would be giving to Abram’s descendants. And so Abram settled there and called on the name of the Lord…

Until there was a famine. Abram went to Egypt. Before they entered Egypt, Abram told Sarai to tell the Egyptians that she was his sister instead of his wife. Abram knew that she was beautiful and that Pharaoh would want her as a wife and then kill him. Abram was right. Pharaoh did want Sarai and he did take her. But because he was told that Sarai was Abram’s sister, the Pharaoh treated Abram well and gave him many things.

All of a sudden Pharaoh and his house were plagued. The Bible does not tell us what plagues they were, but I’m sure they were bad. In Egypt, the people believed that everything happened because of their gods. So when this plague happened, the Pharaoh probably went to his temples first and eventually he and the priests figured out that the plague started when Sarai entered his home.

Pharaoh confronted Abram. He gave Sarai back to him before Pharaoh had touched her, and told them to leave Egypt.


Life Application for the Call of Abram:

When God tells us to do something and we choose to obey Him, God is not going to turn His back on us. He will provide everything we need to be successful in His mission. Things might look troublesome in our eyes, but if we are trusting God, He going to help us.

God made a promise to Abram and it had not been fulfilled yet. There was no need for Abram to manipulate the situation and sin in order to save his life. God would have helped him. There is no need for us to “stack the cards” so we can win a game. We don’t need to cheat or lie when obeying God. Lying is sin and God will never ask you to sin.

The fourth part of the promise given to Abram has to do with us. We are those families that will be blessed. Jesus is one of Abram’s descendants and He is the one who blesses all families with the gift of salvation.

What can we learn from the call of Abram? When God asks us to do something, and we choose to obey, then He will help us to be successful in His power.