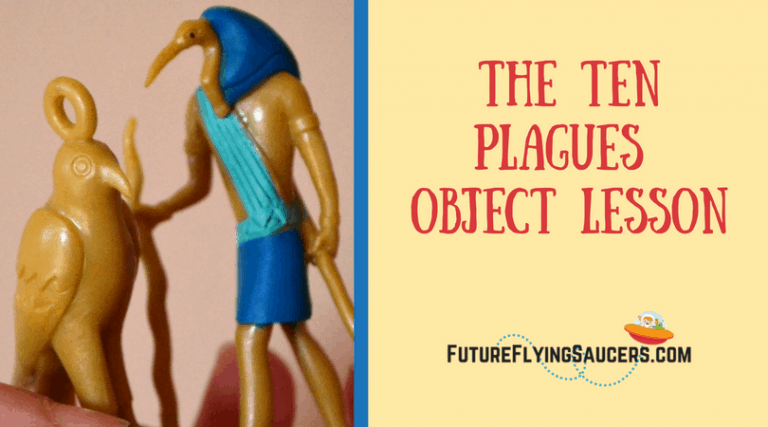 The people of a nation are affected by the heart condition of their leader. This Ten Plagues object lesson helps children describe why God sent the plagues He did and how they affected the Egyptian and the Hebrew people.

Scripture Focus: Exodus 7-11 {This is a large amount of scripture, but to get the full effect, it is good to look at the plagues as a whole. Depending upon your time limit, you might want to do this lesson as 2 sessions.}

Background: Abraham passed the four part covenant on to Isaac, who passed it to Jacob. Jacob’s name was changed to Israel. Jacob was the father of 12 sons. At his death, Israel passed on the promise to Judah, which is interesting because he is NOT the oldest son. In fact, he is forth in line. Evidently the choices that Reuben, Simeon, and Levi made in Genesis 34-35:22; and 49:3-7 caused God to skip them and give the promise to Judah and his generations. Joseph had his 70ish member family live in the beautiful land of Goshen, which was THE prized land of Egypt. However, pharaohs come and go, and soon there were leaders who did not know Joseph.

{Introduce ancient Egyptian history by either having the children identify the contents of the Toob, AND/OR show them the different gods and goddesses of Egypt. Even if you have the Toob, you will want the images of the gods and goddesses for when we discuss the ten plagues.}

During the course of 400 years, the small family of Israel grew to be between 2-3 million people. A pharaoh was on the throne who did not know Joseph. All he knew was that there was a HUGE amount of people who were not Egyptians, who lived in his country, and who could take over the nation of Egypt if they so desired.

Therefore, the pharaoh enslaved each and every Hebrew.

The pharaoh decided that the number of Hebrews was growing too rapidly, so he had all of the baby boys killed at birth.

A woman, named Jochebed, made a basket, or an ark, for her baby and placed it in the Nile River. The princess found the baby, had Jochebed wean the child, and then send him to the palace to live. Moses grew up in Pharaoh’s house and probably knew he was a Hebrew.

One day he watched an Egyptian beat a Hebrew slave. Moses killed the Egyptian and hid the body in the sand. He fled Egypt knowing he would be sought after and killed. Moses fled to Midian where he married, had a family, and took care of sheep. God called Moses through the burning bush and sent Moses to meet his brother Aaron and to get the children of Israel out of Egypt.

This is the history of the destruction of one nation and the birth of another. God told Moses that Pharaoh’s heart was hard. He also told Moses that He was going to bring judgements upon Egypt in order to bring out His people of Israel.

{As you go through the plagues, show the god or goddess who was rendered powerless. Be sure to emphasize what the people would have seen, smelled, heard, tasted, and touched.} 1) All water turned to blood – Khnum was the god of creation and water. The Egyptians went 7 days searching for clean water to drink. All of the fish died and the river stank. Pharaoh’s magicians were able to do this “trick”.

2) Frogs – Hequet was the goddess of fertility, which means she was the one who allowed babies to be created and born. She was represented by frogs. Frogs came out of the Nile and went everywhere. In homes, ovens, beds. The magicians were able to so this “trick” as well. The frogs died and were piled up in the streets. And the land stank.

Pharaoh said the people could go…then he changed his mind.

3) Lice – Isis was the goddess of nature and magic. Thoth was the god of knowledge, wisdom, and magic. When this plague took place, the magicians knew they did not have the same power to bring about the lice. They told Pharaoh, “This was the finger of God.” Lice were on people and all beasts.

4) Flies – Osiris was the god of life, death, resurrection, and sprouting vegetation. The swarms of flies destroyed plants and crops. The land of Goshen was set apart and did not experience the next five plagues.

Pharaoh said the people could go…then he changed his mind.

5) Dead livestock – Apis was a god who looked like a bull. He was the god of strength and fertility. All of the Egyptian cattle, horses, camels, donkeys, and sheep became diseased and died. 6) Boils – Serket was the goddess of medicine and magic. Moses and Aaron took ashes and scattered them towards heaven. Boils and sores broke out on man and whatever beasts were left. The magicians were unable to stand before Moses because of the boils.

7) Thunder-hail-fire from heaven – Renenutet was the goddess of nourishment and harvest. Moses warned Pharaoh to bring in whatever animals were left and the servants from the field. Those Egyptians who now feared God, obeyed. Others did not. When the hail rained down men, beasts and all trees and plants were destroyed. There were no plants for nourishment and no crops to bring in.

Pharaoh told Moses that he had, “sinned this time.” Pharaoh said the people could go…then he changed his mind.

8) Locusts – Bastet is the goddess of protection. The locusts ate what was left after the hail and they filled the homes of the Egyptians. Locusts covered the face of the earth. There was no protection. The people begged Pharaoh to let the Hebrews go. Did he not realize that, “Egypt was destroyed?”

Pharaoh told Moses that he had, “sinned” and asked for forgiveness. Pharaoh said the people could go…then he changed his mind.

9) Darkness – Ra was the “main” god who was the god of the sun. Darkness filled the land of Egypt and for three days no one could see another, nor did the people move around.

Pharaoh told Moses he could take the people, but leave the herds and flocks. But that would not do.

10) Death of Firstborn – Anubis was the god of the afterlife who “weighted the heart” to see if a soul could enter the land of the dead. For this plague God had the Hebrew people DO something to make sure they were safe. They had to obey, or death would enter their homes. The Hebrews painted their doorposts with lambs’ blood. The firstborn child of Pharaoh down to the Egyptians who were in jail all died. There was a great cry throughout the land.

Pharaoh told Moses to take the people and be gone. The Egyptians urged the Hebrews to leave and gave them anything they wanted: clothes, riches, anything they asked. The Hebrews plundered Egypt.

Life Application of the Ten Plagues:

Anubis supposedly “weighted the heart”. All throughout these verses of scripture we hear about Pharaoh “hardening his heart.” Eventually the Bible tells us that God hardened Pharaoh’s heart. Scripture does not give us great detail about what this means, but what it does tell us is that God is concerned about our heart condition.

God knows your heart. And because He knows that you are a sinner, He sent Jesus to die for you so your heart could be without sin. You can be righteous, but Jesus has to do the work. You must believe Jesus died on the cross, rose live from the grave, and that He will return.

God weighs your heart and knows if you really belong to Him. If you do, then eternal life is yours!

What can we learn from the Ten Plagues? God is all-powerful. He loves us and wants us to choose Him.

More Resources for the Ten Plagues: