Get Rid of the Sin Object Lesson {Acts 19}

This Get Rid of the Sin Object Lesson is based on Acts 19 which took place during the years of Paul’s 3rd missionary journey. Teach children to locate Ephesus on a map, define repentance, and to describe the actions of a heart changed by belief in Jesus.

Preparation: Put one messy item per bowl. Put enough in each bowl so that you can cover at least half, or more, of your hand. Be able to clean your hand in the water bowl. **If you are doing the MAP activity as we go through Acts, please move Paul as he travels to the locations mentioned in this chapter.

Background: Paul completed his 2nd journey and returned to Antioch. After “spending some time there,” he began his 3rd journey by traveling back to the cities in Galatia and Phrygia, “strengthening the disciples.” While Paul was traveling, a man named Apollos was preaching in the area of Ephesus. Evidently he was a gifted and eloquent man. But there was a problem. Even though he was accurate about the way of the Lord and the things of the Lord, he was not accurate about baptism in the Lord. He taught about the baptism of John, or a baptism of repentance. So Aquilla and Priscilla pulled Apollos aside and taught him accurately. Then there was no stopping him! He preached and preached and he traveled on to Corinth.

{Read the scripture or tell the story. This is a crazy, amazing event, so be sure to read with enthusiasm.}

Paul stayed in Ephesus for two years and the scriptures say that all who dwelt in Asia heard the word.

Some unbelieving Jews decided to get in on the action and use the name of Jesus to cast out demons. There were seven sons of a Jewish leader, named Sceva. As they attempted to cast out a demon in a man, the demon responded with, “Jesus I know. Paul I know. But who are you?” And the man with the demons attacked the seven brothers and left them wounded and naked.

Because of this incident, the people feared the Lord and Jesus was magnified! Many people who believed in Jesus began to tell about and confess their wrong ways of living. In fact, many of those who practiced witchcraft and magic gathered all of their spell books and made bonfires in the streets of the town.

The burning of books was a HUGE deal!

The Bible tells us that we have all sinned. We were born into sin. Our parents sin, so when we are born, we have sin.

{Put your hand into the bowl of paint.} As we grow and learn, we do wrong things. We make selfish decisions. Sometimes we are mean to other people. We disobey our parents. We think bad things in our minds.

{Put your hand in the chocolate syrup.} Sin is messy. And it clings to us. And it grows.

{Put your hand in the crushed crackers.}

{Carefully shake your hand, or slide it across the top of a bowl. DON’T use the water bowl.} The Bible tells us that is we confess Jesus with our mouth, then we will be saved. 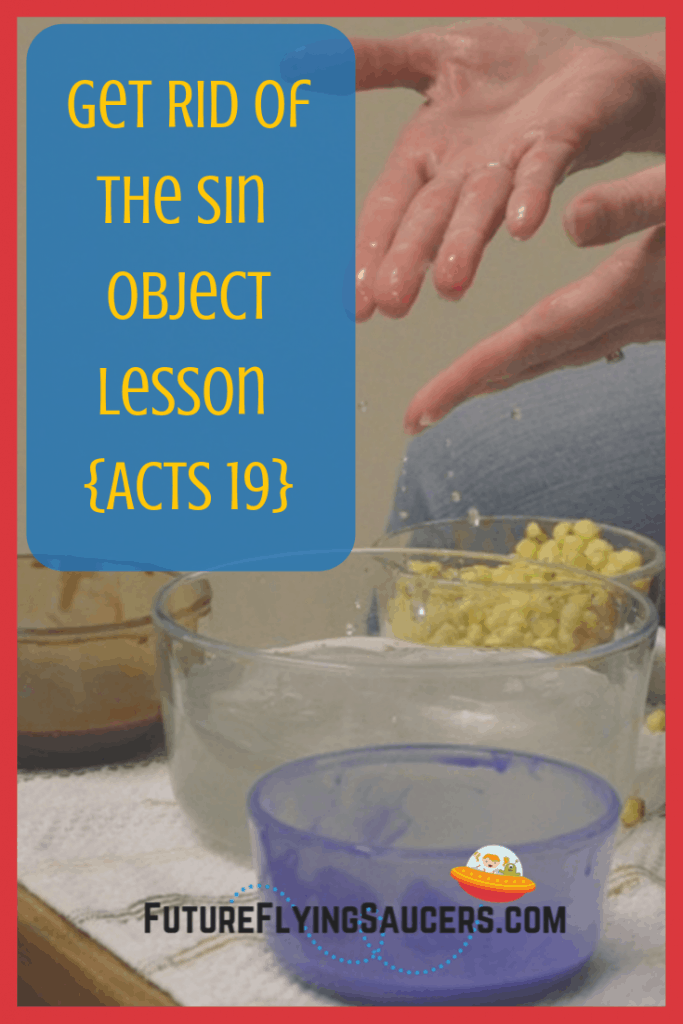 This is what the people of Ephesus did. They began to confess their sins. They told of their deeds. The believers in Ephesus burned their books and stopped buying certain items they used to buy. They got rid of so much “stuff” that they messed up their economy!

Once we believe in Jesus, we need to be sure that every part of our life is pleasing to Him.We need to confess our sins, our short comings to Him. Jesus is the only one who can make us right before God.

{Put your hand in the clean water and wash it.} Jesus cleans us. We cannot do it by ourselves. We must repent. Repentance is so much more than “just being or feeling sorry.” We must have a change of heart. This means choosing to live for Jesus and NOT living for ourselves. It’s fighting against the fleshly desires with the armor of God. We should be protecting ourselves from the lies of this world. It’s desiring to do what God wants, and not what we want.

What can we learn from Acts 19? We need to stay focused on Jesus as the Holy Spirit teaches us what is good and pleasing to the Lord. And if we mess up and sin (which we will), then we must take action by confessing our sins and then being obedient to the Lord.