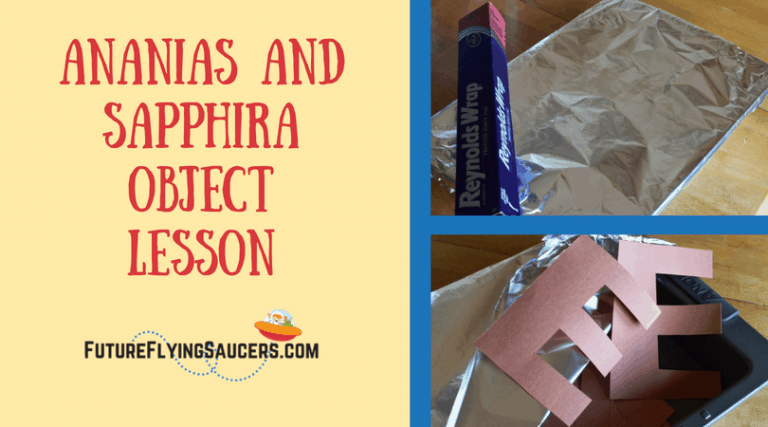 Have you ever tried to do “just enough” to meet a requirement? What about trying to get around a rule? This Ananias and Sapphira object lesson will help our children understand that lying, manipulation, and general sneakiness are not steps in the right direction on the narrow path of godliness. {Deuteronomy 5:32} {Before class, place the E’s in the pan and put aluminum foil over it. Act VERY excited!}

I made brownies!! I cooked all afternoon, and out of the goodness of my heart, I brought in brownies for all of you!! The kitchen smelled so good!! They cooked and they cooled. Would you like to have one? [Kids should be excited and ready for a yummy brownie.]

{If possible, be in the middle of the group. Carefully peal away the top and begin handing out the “Brown E’s”. Allow the children to react to your trick.}

What? Why are you disappointed and upset? [Accept answers. Create a list of feelings the children had when they realized it was a trick. Be careful! The kids became quite angry with me when they saw that I had tricked them!!]

Did I have to bring you brownies today? [No.]

My bringing you brownies would have been a treat. A blessing. A gift. Instead, what did you receive? [Nothing, a trick]

Bible Lesson for Ananias and Sapphira:

Jesus had come, died, risen, and ascended into heaven. The Holy Spirit had arrived to the disciples with the sound of a great wind. The early church was growing every day. Some of the people decided to sell certain objects and properties and bring all of the money to Peter and the disciples so it could be used to help anyone in need.

Not to be out done, Ananias and his wife, Sapphira, sold a piece of property. They kept a portion of the profit for themselves and then planned to give the remainder to the apostles. There is nothing wrong with doing that.

The problem comes from what Ananias and Sapphira planned. They planned to make themselves look better than they really were. They decided to be sneaky and trick the apostles into thinking they were giving the ENTIRE amount of land profit instead of only a portion.

But God knows everything. And Peter had a discerning Spirit within him. When Ananias brought the money to Peter, he confronted him and asked, “Ananias, why has Satan filled your heart to lie to the Holy Spirit?” The land money was theirs. They could do what they wanted with it. But bringing it and lying about the amount was lying to God.

Ananias had no time to respond. He fell to the ground, took his last breath, and died. Men picked up his body and buried him.

Three hours later, Sapphira came to Peter not knowing what had happened. Peter asked her if the amount stated by Ananias was THE amount for the property. She agreed with her husband’s number. Peter responded, “How is it you two conspired together  to test the Spirit? Look, the men who buried your husband is here to bury you.” Then she fell to the ground, took a last breath, and died.

The young men came into the room, picked her up, and buried her next to her husband.

Life Application for Ananias and Sapphira:

Did I HAVE to bring you brownies today? [No] Did Ananias and Sapphira HAVE to give all of their money to the church? [No] Their sneakiness, or trickiness, is seen when they try to keep some of the money and then lie about the amount given to Peter. They were trying to look generous while being greedy.

Sometimes when we try to trick people, we bring others in on our “joke”. Ananias could have lied on his own. Instead, his wife was a part of the trick as well.

How come we don’t die when we lie? [Allow for answers.] What do all people deserve? [The wages of sin is death.] The fact that we do not die when we sin is grace and mercy from God. God could take our lives if he wanted to, but for some reason he chose to do this with Ananias and Sapphira. They became an example to the early church.

God takes sin seriously. We should as well.

{Hold up and read the poster.}

Where are the eyes of the Lord? [In every place] Even if you are in your bedroom by yourself, or outside by yourself, are you ever alone? [No] No, God is always with you. He will never leave you, nor forsake you.

What does God watch over? [the evil and the good] God sees everything you do, the bad and the good. Good choices and bad choices. He sees your heart.

What should we do when we begin to think about tricking someone, or saying something about another person, or trying to do something we know is wrong when we are by ourselves, or some other sin? [Allow for answers.] The Bible tells us to take every thought captive. When we begin to start thinking negative thoughts about a person or situation, then we need to tell ourselves, “No! Stop thinking that! God wants me to be honest. he wants me to be pure. He wants me to honor him all the time.”

What can we learn from Ananias and Sapphira? If we want to be godly, then we must remember that God knows my thoughts and motivations, and that He cannot be tricked.