Create a Lego creation. I had a helicopter and a boat made for me. Then have a bowl of loose legos.

Background: The Creation Story is the source of much discord and many arguments in our world. It is important to realize that one’s view of creation will either enhance or destroy a faith in God.

{Show the children the spelling letters. Spread them out on the table and move them around to spell the word, “CREATION.” Then pick up the letters.} I am going to drop these letters and the word CREATION will be spelled again.

{Drop the letters. They should be in random order.} Those letters could not rearrange themselves to make any sense. We had to do that. We had to know the order of the letters so the word would be correct. A word is created because of letter rules and vocabulary. Chaos cannot create order. {The children will argue that they cannot do that. Show the bowl of loose Legos and ask:}

God is the ultimate Creator. He is all powerful!! God created with Intelligent Design. Everything God created has a purpose and everything has its place.

{As you list each truth, ask the children if they agree with it. Explain it if needed.}

These foundational truths are important because the scriptures that tell us about how the world was made and how people were created are pretty unbelievable. In fact, they are so unbelievable that many people say that Genesis 1 and 2 are descriptive like a poem and are not factual.

Many scientists state that creation cannot be correct because it does not reflect scientific fact.

Let’s go back to our basic rules and we need to think logically. If God exists, and the Bible is from God, and God is all powerful, then let us read what Genesis tells us about how the world was created. It must be true.

{Read Genesis 1:1-27. Use the ESV Bible if possible. Draw on the board what happens as God creates it.}

Christians are accused for not thinking about creation in a scientific manner. What many people do not understand is that Christians look to the Bible first and then at science because God created science. Science does not create God.

There have been many scientists over the years who knew that there was a God and that He was the Creator. Examples are Isaac Newton (laws of motion), Johannes Kepler (laws of planetary motion), Albert Einstein (theory of relativity), and Werner von Braun (NASA’s moon project).

{Pick up the created model.}

These scientists understood that something that is created must have a Creator. This Lego model while it might be difficult for some people to design cannot compare to how difficult it is to make a frog, or an eyeball, or a mountain.

The book of Romans tells us that all of creation tells us that there is a God. Unfortunately, many men choose to worship nature and not the God who made it.

Be a person who thinks.

What can we learn from the creation account? If we want to be a Christian, then we must understand the importance of having a Biblical worldview. 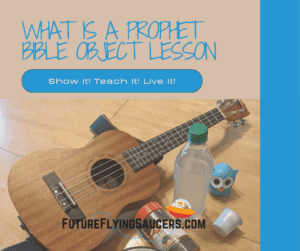 What is a Prophet Bible Object Lesson