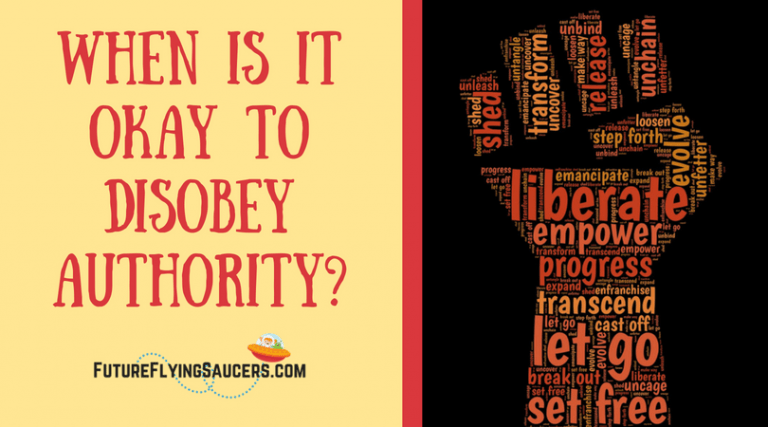 When is it Okay to Disobey Authority?

Respecting authority is important. It helps us to be good citizens. However, when is it okay to disobey authority? Looking at events in the lives of Jesus, Paul, the disciples, and midwives will help our children understand God’s authority versus man’s authority. This is a step in the right direction on the narrow path of godliness. {Deuteronomy 5:32}

Materials: an American Flag (or the flag of your homeland. If you live in a country other than the United States, this lesson will still fit. Change the wording to match your country.) Background: When God gave Moses and the Israelites the Law, it was understood that God would lead and the people would follow. Israel was to be a different nation led by a living God. However, the people looked around and saw that other nations had a king, a leader who was human. Eventually God led Samuel to choose a king and then Israel was “like the others”. God warned the people that having a king would mean they would lose certain freedoms.

…Fast forward in time to the governments of nations today. All are led by humans.

Object Lesson on When is it Okay to Disobey Authority:

{Hold up the flag.} What do you think of when you see this flag? [Allow for answers. Lead them to be patriotic in nature. I found that younger kids needed more help with this question.]

We live in a nation that is a federal republic. We elect people to represent us in Washington DC. Those elected representatives are to represent the thoughts, cares, and beliefs of the people of their state when laws are created and passed. Sometimes we like the laws that are passed and sometimes we disagree with them. But when a law is passed, we must obey the law. We can try to get the law changed, but we must obey the law.

Bible Lesson on When is it Okay to Disobey Authority:

{Show the flag again.} What does it mean to be a good citizen? [Allow answers.]

Being a good citizen means:

There are a few other characteristics that make a good citizen, such as caring for people in the community. But for the most part, a good citizen obeys the authority of his or her government. Respecting authority is important. It helps life move smoothly. It helps people to get along with each other. Disputes are taken care of in a peaceful manner.

Children are to be good sons and daughters by respecting their parents. We are to all be good students by listening to and respecting the advice of elders.

But is it ever okay to disobey authority?

Life Application for When is it Okay to Disobey Authority:

Exodus 1 tells us that a Pharaoh came to the throne who did not know Joseph. Remember, he had brought his family to live in Egypt during the famine. During that time, the Israelites multiplied. The group was growing so fast and large that this new Pharaoh began to fear them, thinking they might rebel and overtake Egypt. He turned the Israelites into slaves. He told the midwives to allow baby girls to be born, but if a baby boy was born, he was to be killed. But the midwives feared God more than Pharaoh. They disobeyed him and allowed the boys to live. Eventually Pharaoh had all the baby boys thrown in the river. But one boy was saved. Do you know who that one boy was? [Moses!]

How do we know what God commands? [By reading the Bible.] God is the ultimate authority. His words and ways win, no matter what. Think about those midwives. Was Pharaoh asking them to do something that went against God’s words and ways? [Yes. He wanted them to kill.] Whom did the midwives obey? [God] Yes, and God rewarded them.

Think about the disciples. The temple leaders did not want them to preach in Jesus’ name. But what was the last command Jesus gave to them before he ascended? [To be his witnesses and tell people of all nations about him. Mark 16; Acts 1] Were the leaders going against God? [Yes] Whom did the disciples obey? [Jesus]

Words do not express how important it is to know God’s laws and His ways. If someone was to ask you to do something, you need to know if it’s okay with God or not. If it reflects God, then everything is fine. If it does not reflect God, then you have to decide who you will obey. The midwives and the disciples understood that they could get in trouble with authorities if they disobeyed. But they feared God more.

Some situations are easy to figure out. Don’t steal. Don’t kill someone. But what if an adult wants you to do something you know is wrong? What if that adult wants to touch you in an inappropriate way? or hits you? What if an employer wants you to lie about some money? Do you respect his or her authority?

Biblically, an adult does not have permission to treat you in a harmful manner. Will parents discipline? Yes, that is their job. But if an adult attempts to harm a child in any way, that adult is not an authority that is to be respected.

What can we learn from Jesus, Paul and the midwives? If we want to be godly, then we must respect our government, our parents, and other authorities. Only when asked to do something against God’s commands do we choose God over man.

For more ideas, lessons, coloring pages, games, etc, click to my Old Testament Pinterest board! I’ve found all kinds of fun stuff for you!