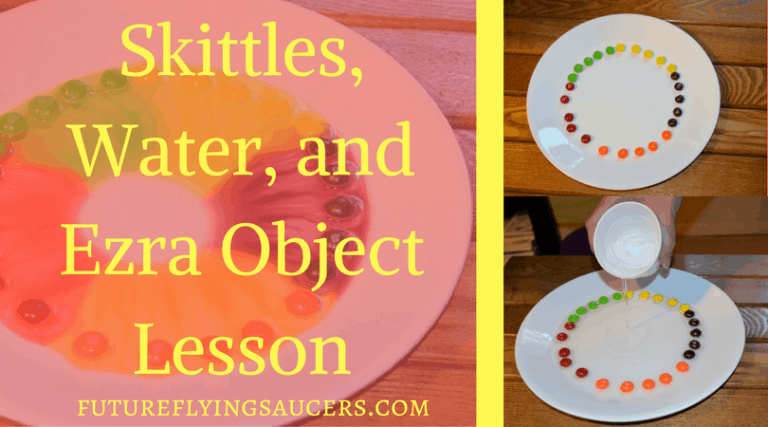 When a person is in the middle of a sinful situation, it is hard to make correct choices. Use Skittles and warm water for this Ezra Object Lesson and teach children that God’s commands are for our protection. 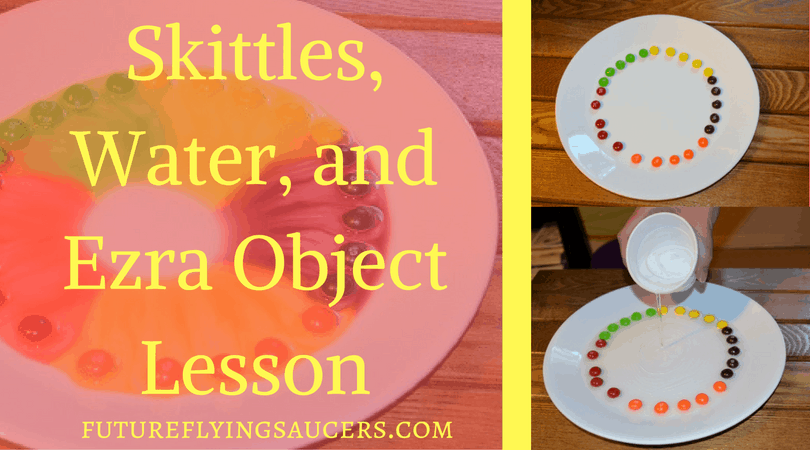 **NOTE: This section of scripture can be hard for kids to hear, especially for those who are in divorced families. Sometimes scripture doesn’t make sense to us humans. And we know that God is good and loves families. It is important to remember that God has a HUGE plan we know little of…AND that His objective is to get rid of sin so He can be glorified. Be sensitive to those kids who might have questions about their own families after this lesson and be sure to reassure them that all people and families can be redeemed through Jesus Christ.

Background: Zerubbabel returned with many of the exiled Jews to Jerusalem and rebuilt the temple. Afterwards, Esther, a Jewess who was a Persian queen, saved her people from annihilation. Twenty years later, Ezra brings another large group of Jews back to Jerusalem.

{Place the Skittles around the plate creating a large circle. Pour the warm water in the middle of the Skittles, enough so the liquid just about covers the candy. Watch what happens!} 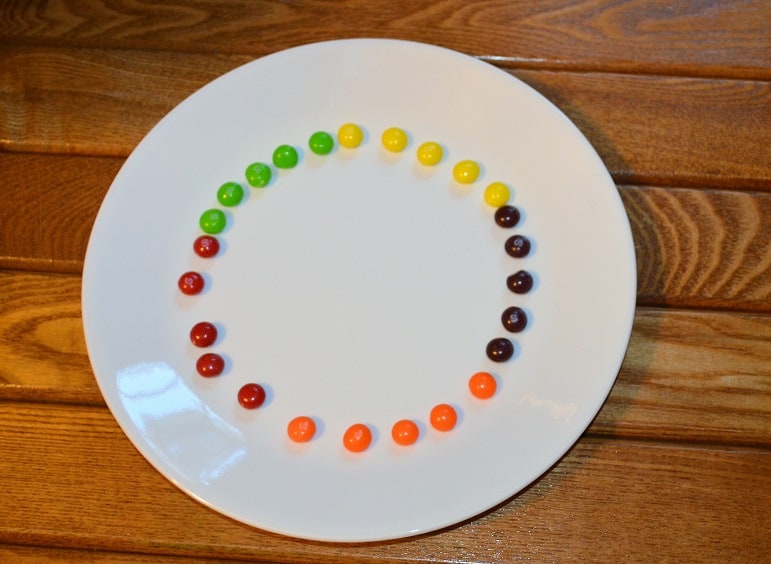 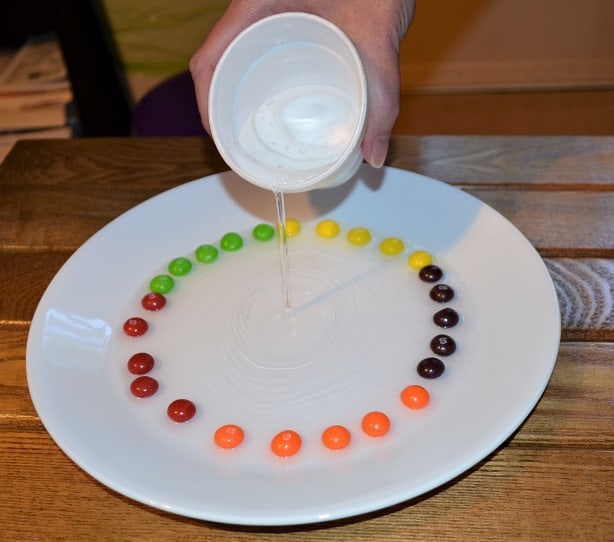 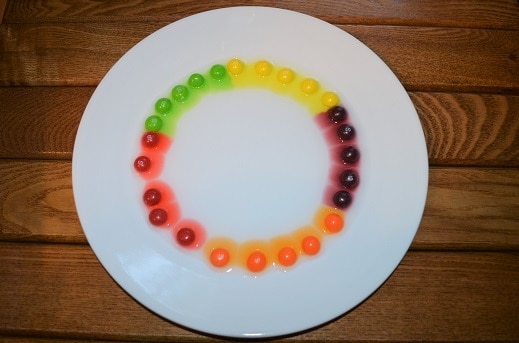 These Skittles were untouched and perfect candies when first put on the plate. 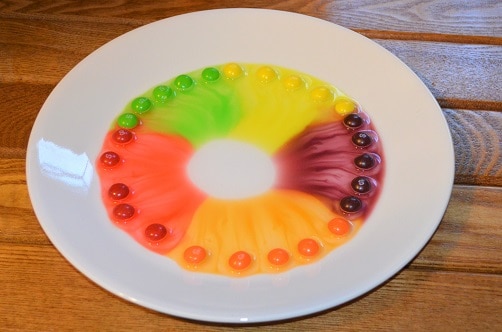 {Take your finger and mix the colors. A brown-red color should appear.} 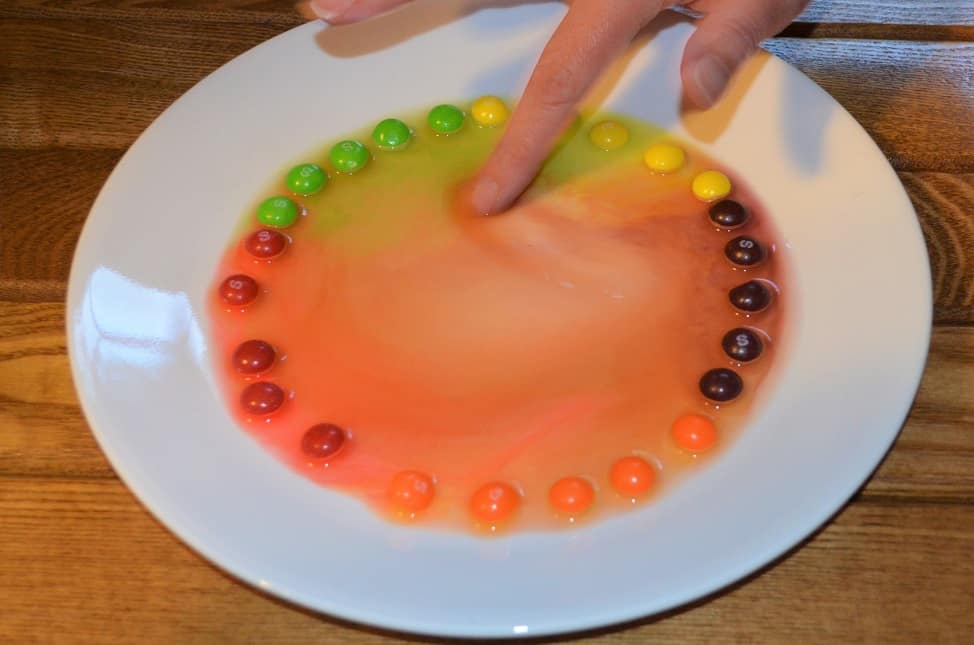 The colors stayed separate for a time and then we chose to mix the colors. That’s what happens with sin. It looks really good to us at the beginning, but once we choose to do the sin, and then do it again, and again….then our lives get mixed up and messy.

That’s what happened with the Jews. Zerubbabel took back a group of people to Jerusalem to rebuild the temple. Once the temple was built, the people came and worshiped God and began to celebrate the feasts and offer sacrifices once more.

The Samaritans in the land had given Zerubbabel a hard time about building the temple…mainly because they worshiped idols. The Samaritans were a people group who were part Jew and part Canaanite. They had turned from God’s law to not intermarry.

As the years passed, the Jews began to marry women and men who were not Jews. God sent Ezra, a priest and scribe who sought God, to Jerusalem. He took another large group of Jews with him. The Persian King also gave Ezra treasures for the temple treasury. An offering of sorts. Ezra also made sure many Levites and Priests returned as well. Ezra wanted to be sure that the temple had plenty of people to run it.

Ezra was a man who sought the Law of the Lord and was determined to follow it. He was also prepared to teach the people God’s Law.

After Ezra arrived in Jerusalem and had put the treasures in the temple, the leaders of the people told Ezra that some of the Jews, and even some of the Priests and Levites, had intermarried with Canaanites.

Ezra was distraught! He ripped his clothes, pulled his beard and sat down totally stunned by this news. Before the evening sacrifice Ezra fell face down before the Lord. 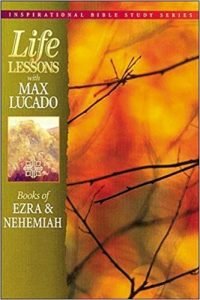 Ezra prayed: “Oh, God! I am ashamed to lift my face to you! I am humiliated because of the sins that are higher than my head! We are guilty! For a little while you have given grace. For you have told us to not give our sons and daughters in marriage to those who are unclean. Lord, only You are righteous!”

While Ezra prayed, a large gathering of people showed up in the temple and they were weeping because of their sin. A leader stood up and cried loudly for all to hear, “We have sinned against God and taken pagan wives. Let’s make a covenant with God to put away these wives and their children.”

Ezra stood up and the people decided that those men who had married pagan women would come and confess to Ezra and a few other leaders who had NOT taken pagan wives. Then those pagan wives, and their children, would have to leave and go back to where they came from.

And the people obeyed.

It is hard for us to believe that God would be pleased by the breaking up of all these families. But God is not pleased with sin and it spreads and affects everyone. Those marriages were started in disobedience and idols became the norm. Therefore, in THIS particular situation, it was in the best interest for the Jews that these women and children return to the Canaanite villages.

God chose the Jews to be His holy people, a nation set apart from the rest of the world. If the Jews intermarried, then they were no longer set apart. They were mixed, like the Skittles. And the mixing of Jewish life and idol worship led to even more sin.

The same thing can happen to us. If you choose to be a Jesus-follower, a Christian, then you are to be set apart. Christians live life by God’s rules, not the world’s. That means we make different choices.

It is important for you to go ahead and think about what you would do if you were in these different types of scenarios because when you’re in the middle of a tempting situation and have no plan, then you will probably choose to sin.

However, if you decide now to hang out with people who love Jesus, then that will save you a lot of trouble in the future.

There is one command though that we need to follow. 2 Corinthians 6:14 tells us to not join with those who do not believe. This command is talking about making commitments.

God does not give us commands like this to make us miserable. He tells us this so we will not have to deal with the trouble these particular sins can cause. God loves you. He always wants what is best for you. He wants you to stay away from situations that can hurt you.

What can we learn from Ezra? God takes sin seriously and gives us loving commands that protect us if we choose to obey them.