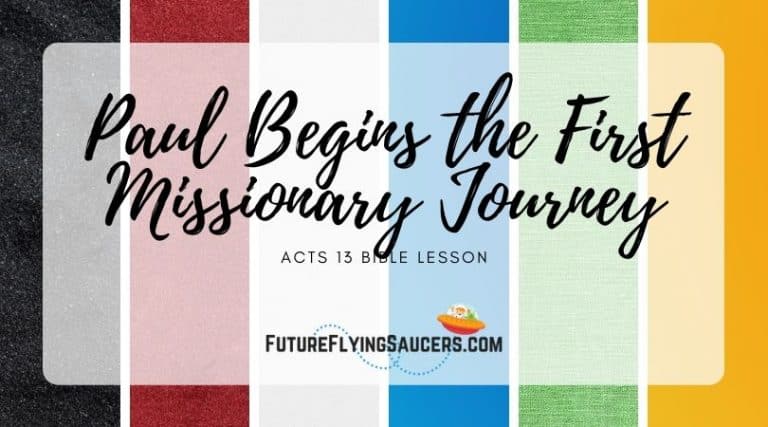 People will either choose God or something else. Use this Acts 13 bible lesson on Paul’s first missionary journey to discuss the wordless book and how people will try to stop us from telling others about the gospel.

Background: Saul, the great persecutor, had been converted and accepted by the leaders of the new church movement. Peter had a vision and learned that Greeks and gentiles were to be a part of the new church. The believers have spread from Jerusalem to Samaria, to Ethiopia, to Antioch, and there are those who do not like this new religion.

After Peter was released from jail, Saul and Barnabas returned to Antioch with John Mark, who was a cousin of Barnabas. The church leaders in Antioch prayed and fasted as they ministered to the Lord and the Holy Spirit told them to separate out Saul and Barnabas for work. The men continued to fast and pray, and they laid hands on Saul and Barnabas and sent them out as God called them.

{Hold up the Wordless Book, whichever form you are using. Ask the children if they recognize it and if they know what the colors mean. Explain that these books are used to preach the gospel, just like Saul preached the gospel.}

These men, and John Mark, began the first missionary journey. They went to Cyprus and stopped at the synagogues to preach the word of God. When they went to the town of Paphos, they met a man, a sorcerer, named Bar-Jesus. This man was with the leading government official, Sergius Paulus, an intelligent man.

{When you quote Paul, be dramatic!}

At this point, the Bible begins to call Saul, Paul. Paul, who was filled with the Holy Spirit, turned to Bar-Jesus, looked intensely at him, and said, “You who are full of all deceit and fraud, you son of the devil, you enemy of all righteousness, will you not cease to make crooked the straight ways of the Lord? Now, behold, the hand of the Lord is upon you, and you will be blind and not see the sun for a time.” (verses 10-11, NASB)

Immediately, the sorcerer could not see, but the government official believed and was astonished at the teaching of the Lord. 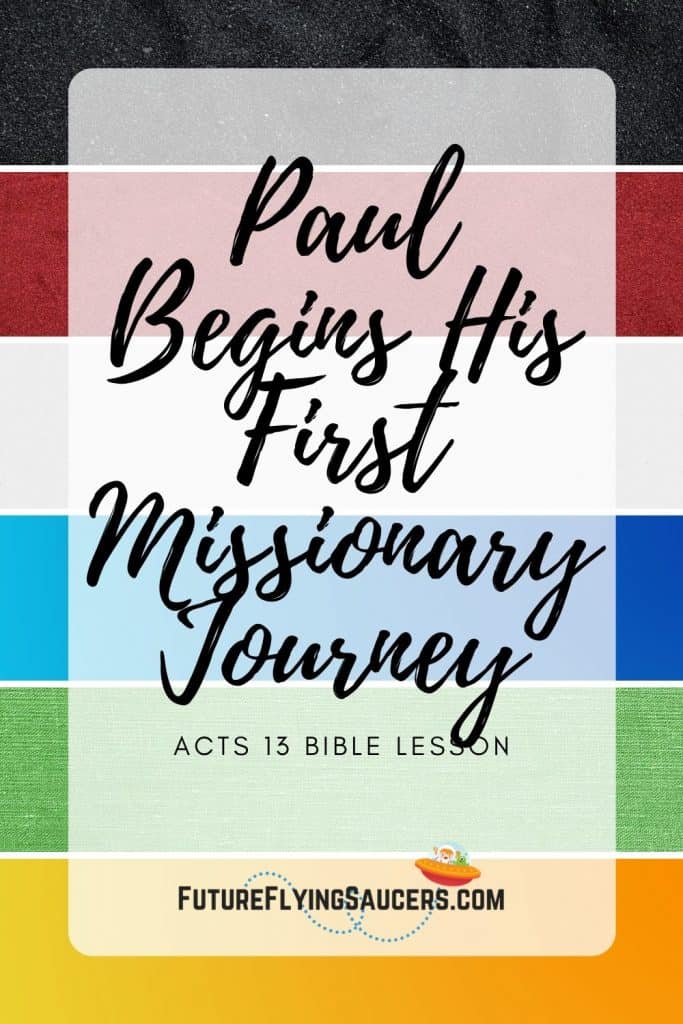 Paul, Barnabas, and John Mark went on to Perga. And then John returned to Jerusalem and the other two went on to Antioch in Pisidia. (Not the same Antioch they left from.)

The two men went to the synagogue and after the readings were done, one of the rulers of the synagogue asked them if they had any words for the people. Paul stood up and started to preach. He began with the Old Testament scriptures when Israel was brought out of captivity in Egypt. He spoke of taking the land for their nation, and Samuel, King Saul, King David, and then he started talking about Jesus.

{Hold up the wordless book and point to the colors as Paul told the gospel.}

{Explain that baptism (blue), Christian growth (green), and going to heaven (gold) happen after belief in Jesus. Many times people need to hear the message of the gospel a few times before their hearts are opened to Jesus.}

After Paul had preached, the gentiles begged to have Paul preach again the next week. Many began to follow Paul and the next week he preached again in the synagogue. Almost the entire city came to hear Paul preach.

However, when the Jews saw the crowd they became jealous and started speaking against Paul and his teachings. Paul and Barnabas became bold and stated, “You were to receive the message of God first. But since you reject it, and consider yourselves unworthy of eternal life, then we turn to the gentiles!”

When the gentiles heard this they were overjoyed! They glorified the Lord and many were saved. And the word of the Lord continued to spread.

As for the Jews, they continued to stir up controversy and they attempted to persecute Paul and Barnabas. The men shook the dust off their shoes as they left town and traveled to Iconium.

Two times Paul and Barnabas were preaching the gospel and people tried to stop them. The first time Paul knew the man was a sorcerer and he called him out: full of deceit, son of the devil, and enemy of righteousness. These words may seen pretty strong to us, but Paul knew who he was dealing with.

What exactly IS a sorcerer? Some people would say a witch, someone of dark magic, or says spells. Are people like this really real?

There are some people who pretend to be sorcerers so they can get money, such as palm readers, or fortune tellers. Then there are others who, like this sorcerer whom Paul dealt with, are messed up in something beyond themselves that is not of God.

When it comes to the gospel, people are either on God’s side, or they aren’t. People have a hard time with this truth. Think back to the garden of Eden. Who influenced Eve to eat of the fruit and disobey God? (Satan) Satan is against God. He always will be and he wants to turn people away from faith in Jesus.

The second time, Paul was stopped by the Jews from preaching the gospel. The Jews were (and still are) God’s chosen people. They love God, but do not accept the message of Jesus.

What can we learn from Paul beginning his first missionary journey? God loves us. That is what the gospel message tells us. But God is also holy, and we must deal with sin. The gospel tells us that as well. It is always good to be ready to share the gospel. Jesus died for a reason. And God’s grace covers us through the blood of Jesus. If we do not have that blood on us, then we do not have a right relationship with God the Father. We either believe in Jesus, or we don’t. There is no middle ground.