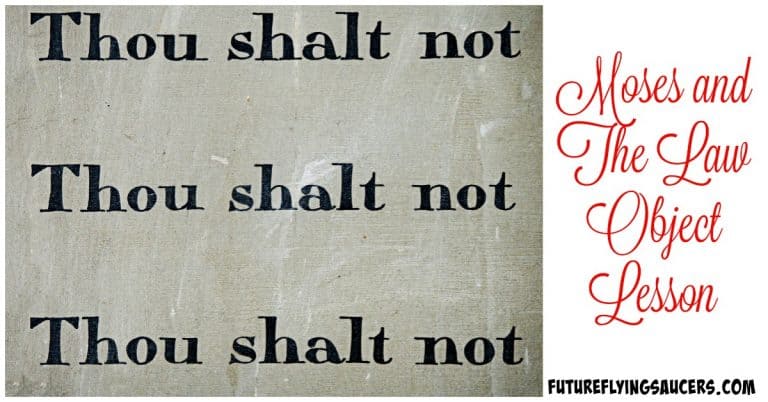 Moses and The Law Object Lesson

With a GPS, these days it can be difficult to get lost. However, relying on technology that *could* be incorrect might steer you in the wrong direction. This Moses and the Law object lesson teaches children the purpose of the law and what Jesus expects from those who follow Him. Background: The Israelites were forced into slavery and God raised up Moses to be The Deliverer. Pharaoh’s heart had been hardened even after nine horrible nationwide plagues that destroyed Egypt’s economy and way of life. But Pharaoh’s heart still would not allow the people of Israel to leave his nation. The tenth and final plague caused a cry to be heard throughout Egypt as God killed the first born of all Egypt and passed over the homes with the blood of the lamb on the doors.

Object Lesson for Moses and the Law:

{Show the map. Unfold it or show the pages if it’s a book.}

The reason we use maps or GPS systems is so we can find our way. And in order to get where we are going, we have to follow the rules. We have to drive the speed limit. We can’t drive down the median. We stop at red lights and stop signs.

{Tell a quick story about a time when you were driving and did not follow the rules, or you got lost.}

Bible Lesson for Moses and the Law:

As the Hebrews left Egypt, they carried along with them riches given to them by the Egyptian people. Moses, directed by God, had the people follow an angel of the Lord in the form of a pillar of cloud by day and a pillar of fire by night.

Pharaoh let the people leave and then changed his mind once again. He and the army of Egypt went in pursuit. The Israelites panicked because they had reached the Red Sea with no way across, but Moses told them, “The Lord will fight for you!” Moses obeyed God and raised his staff. The water split and the Hebrew people crossed over on dry land. The Egyptians tried to cross as well, but God thwarted their way and caused the wheels to fall off of the chariots. Once the people were on the other side, the waters crashed down and the army of Egypt disappeared.

The Israelites walked on. Soon they began to complain to Moses. They said they had no water or food and that they should return to Egypt. In each situation, the Lord provided for the Israelites’ needs. He provided water from rocks, quail for meat, and bread from heaven. The people traveled for three months until they reached Mt. Sinai.

God gave the Israelites some rules called the Ten Commandments. These Commandments would be The Law that everyone in the nation would follow. These laws were given to the people by God to protect them, to set them apart from the other nations, and to teach them how to live for God.

God was setting up His nation. He had lots of people who needed leadership and organization as they traveled and as they entered the land He was to give them.

God new what obstacles the people would be facing. He wanted to protect His nation. The Law was not set up to make the Israelites miserable, but to help them be a people who reflected the nature of God to the world.

Life Application for Moses and the Law:

In fact the Bible tells us that even if you keep ALL of the commandments and break just one, that you have broken all of them. We are sinners. We are not perfect.

The Law tells what what we cannot do. And because we cannot keep the law of God we deserve death.

Jesus chose to take our place of death because He can follow the entire law without messing up. He took your punishment. What a great gift! And He did it because He loves you.

Those two commands wrap up all of the other ten: Love God and then love people.

God is not trying to make your life miserable. He desires to protect from environments or decisions that could harm you. If you decided to break God’s rule for stealing, you could end up in jail for a long time. That would mess up your life and your relationships with people. That’s not good.

God wants to bless you and most of the time He blesses when you choose to obey Him.

What can we learn from Moses and the Ten Commandments? The purpose of the law is to show us our sin and why we need Jesus. By abiding with Jesus and obeying the best we can, we can have a healthy and fulfilling life that glorifies God.

More Resources for Moses and the Law: